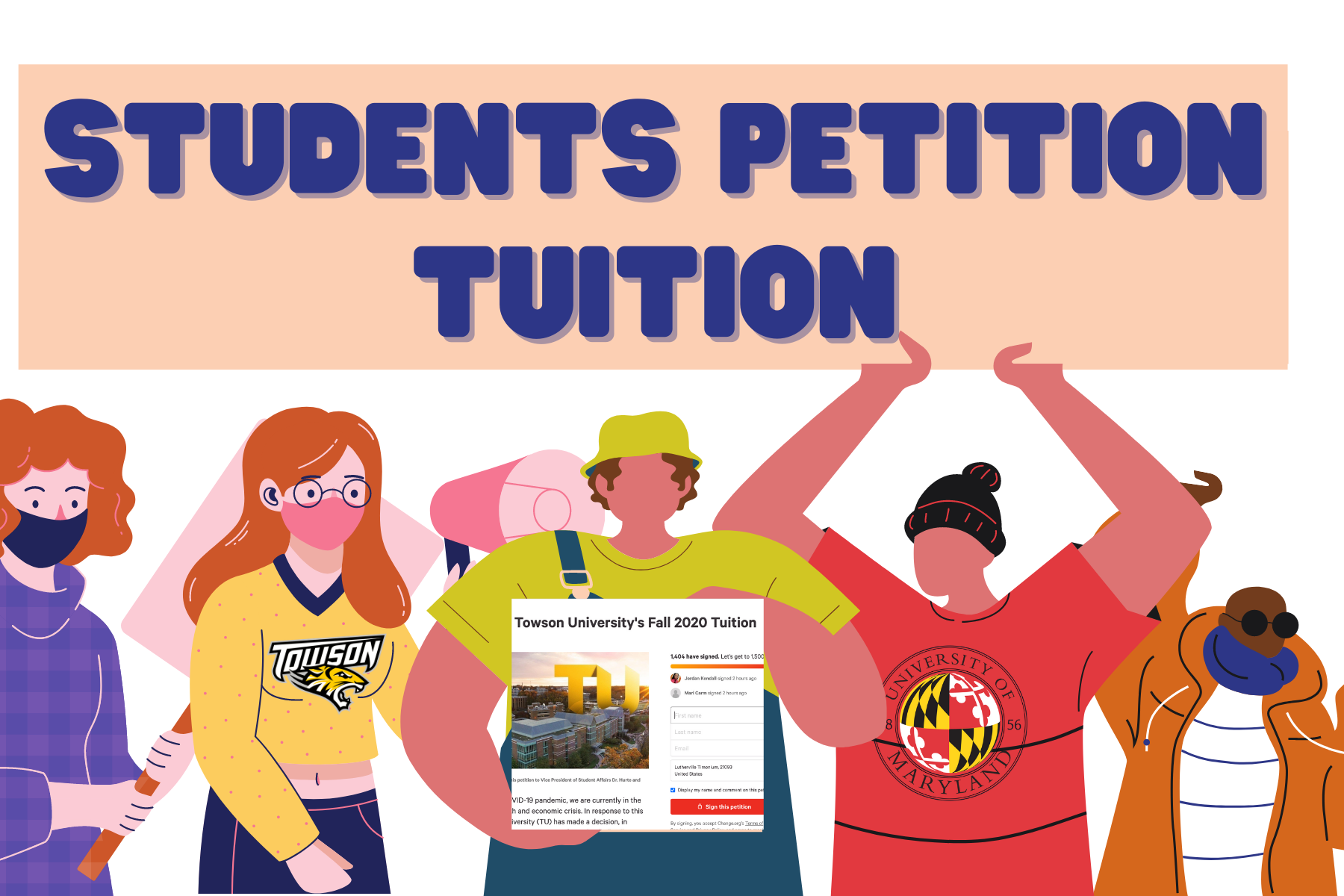 A petition advocating for a reduction in TU’s Summer 2020 tuition was revised to include a 25% reduction in tuition for the Fall 2020 semester.

This reduction comes in response to the decision made by Towson University President Kim Schatzel to move the majority of instruction to distance learning for the remainder of the Fall 2020 semester.

“The students of Towson University have collectively discussed and agreed that tuition rates and fees for the Fall 2020 term, and any other term equally affected (this includes Summer 2020), should be re-evaluated and adjusted accordingly because the resources and facilities paid for by said tuition and fees are no longer available amid the global pandemic, and the online experience differs greatly from the face-to-face experience and should not be valued at the same cost,” states the petition, created by Kelsey Schwartz.

Schwartz, a graduate student, explained that she was motivated to create the petition because she felt that she, as well as other students, will not be receiving the same experience in terms of academics through online instruction. She explained that after spring break, the rest of her classes for the Spring 2020 semester and Summer 2020 semester were asynchronous, which she holds negative feelings about. While the university affirms that the quality of education is not altered by online instruction, as stated in the petition, Schwartz feels otherwise.

“I was not happy with the education I was receiving at the cost I was paying. The education and experience decreased greatly,” she said. “All lectures were recorded, there was no opportunity to ask live questions or hear from other students, no live discussion, and the only way to access the professor was via email.”

The petition was created in June of 2020 and asked for a 25% reduction in summer 2020 semester tuition. Upon hearing about President Schatzel’s decision to move all instruction to remote learning before the original date of November 30, she decided to revise the petition to include the Fall 2020 semester.

“The rate of 25% was similar to the tuition reduction of other schools during the summer,” Schwartz said. “We will continue advocating for a 25% reduction of the Fall 2020 tuition. I’d like to see a refund of summer tuition as well but I am only one person and my ability to create change is limited.”

The petition also advocates for a full breakdown of fees for the Fall 2020 semester.

“I think it’s important for the students to see a full breakdown of all of the fees. As for instruction, I mentioned earlier the differences between online and in-person instruction,” Schwartz said. “We acknowledge online instruction has a cost, overhead costs, salaries, etc. but the online experience is simply not worth the full cost of tuition that usually includes use of all campus facilities, live instruction and peer and faculty interaction, hands-on experience, etc.,”

Schwartz said Schatzel’s decision didn’t necessarily impact her because her program already decided to do online instruction before the announcement.

“I signed the petition because I think it is absolutely ridiculous we are being charged the full amount when they close the gyms and cancelled sporting events,” David Kirchner, a senior at TU, said. “There needs to be a reduction because we are no longer using the campus or use resources on campus for this semester, so why [do we] have to pay for it? I’m not sure how much [of a] reduction because I want the professors to be paid in full since they need to make their money, they didn’t ask for this.”

Senior Mimi Grace Afua also signed Schwartz’s petition and cites feelings of wrongdoing on the University’s end as a reason for signing.

“To me it seemed like for a long time Towson haven’t really cared about us and all they care about is our money,” Afua said. “Literally this pandemic going on has affected everyone regardless of age. It has affected our health, finances, mental health, and basically our entire lives, and they just don’t care.”

During a ReTUrn to TU Townhall hosted by Schatzel and several other members of the TU administration on Sept. 3, Ben Lowenthal, Vice President of Administration and Finance, announced the plan to reduce mandatory fees by 10%.

As explained in the meeting, this decision came as a result of the Student Government Association’s proposal to reduce the athletics fee by 31%, resulting in a $154 refund to students.

University officials decided to instead propose a 10% reduction of several fees, including the athletics and auxiliary fees, that would equate to a $154 refund to full-time students. SGA approved of this proposal.

In terms of the upcoming Spring 2021 semester, Schwartz believes that there needs to be a reduction in tuition if learning will take place primarily online. While she made the petition on her own, which has received in over 1,400 at the time of publication, Schwartz has been in contact with a student attending the University of Maryland to discuss how to bring this issue to the attention of the University System of Maryland, the governing body of several schools within the state.

“I’d like to see a reduction in tuition for an education that is fully online,” Schwartz said. “Additionally, I have joined with students from UMD to begin a petition that will involve students from all USM schools in an effort to make this tuition reduction a reality by creating more pressure from more people and making our voices heard.”

Tyra Reed, a graduate student at UMD, also started a petition, alongside three other UMD students made a petition similar to the one created by Schwartz, however, the focus of Reed’s petition was on reducing the mandatory fees rather than tuition. The petition for UMD is also focused on reducing the fees for the entirety of the pandemic.

“We are for a review of all costs,” Reed said. “Yes, we’re especially focused on feed because it’s a very clear ‘if we’re not being provided access to a service, for example, athletics, we should definitely get refunded for that.”

Rather than creating a new petition focused on reducing tuition for all of the schools under the USM umbrella, Reed explained that both herself and Schwartz have discussed revising their initial petitions to include USM reducing tuition.