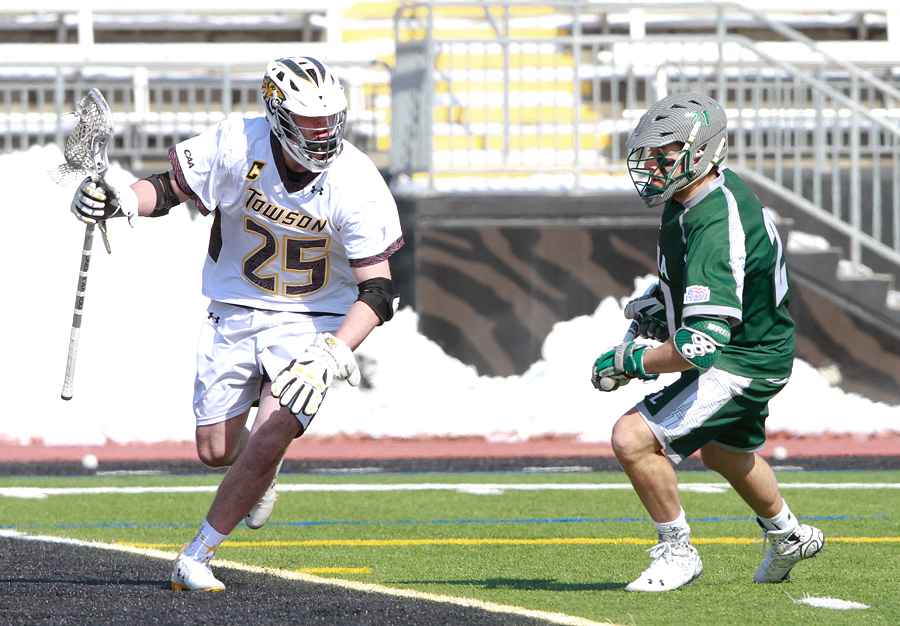 No. 14 Towson defeated the Georgetown Hoyas 9-6, using a 7-0 run to begin the game to fuel the victory.

The Tigers (2-1) jumped out to a 7-0 lead early in the second quarter after five different players scored goals.

“It’s important any time you lose a tough game to come back the next game and play to your ability,” Head Coach Shawn Nadelen said. “Coming out early and scoring today was important.”

“The game plan opened everything up for me,” he said. “Luckily, I was able to capitalize on most of those opportunities.”

Hodgson missed last season with a jaw injury, but has come back this year as an offensive threat for the Tigers. He is tied with sophomore attackman Joe Seider in leading the team in goals.

“Andrew [Hodgson] has been a big part of Towson lacrosse ever since he came here,” Nadelen said. “He’s making the most of this season and he’s been strong for the team.”

The Hoyas (0-2) didn’t score their first goal until midway through the second quarter and the Tigers went into halftime with an 8-1 lead.

Towson had 24 shots and six goal-scorers in the first half.

Georgetown’s offense was more active in the second half, scoring three goals in the third quarter. Junior attackman Spencer Parks added his second goal of the game as well and Towson went into the four quarter with a 9-4 lead.

The Hoyas added two more goals in the fourth quarter, but the Tigers held off the attack and came away with the victory.

Senior goalie Tyler White, who was pulled from the game against Loyola (1-2), finished with 10 saves.

“Tyler [White] was strong today,” Nadelen said. “He was good from the start, making saves on the doorstep, and most of the ones that he did let in were defensive errors.”

Hodgson said that the Tigers can match up with the rest of the teams in Maryland.

“I’m a firm believer in anyone can beat anyone on any given day,” he said. “Coach [Nadelen] has helped put us as one of the most dominant teams in Maryland.”

This was Towson’s first game of its four-game road stretch, which continues when it takes on three in-state opponents next.

“We have to continue to get better,” Nadelen said. “The good news about the road games is that we don’t have to leave the state of Maryland. We need to be diligent though and have to improve. Practice is going to be paramount for us.”

Towson’s next game is on Friday against Mount St. Mary’s at 4 p.m.