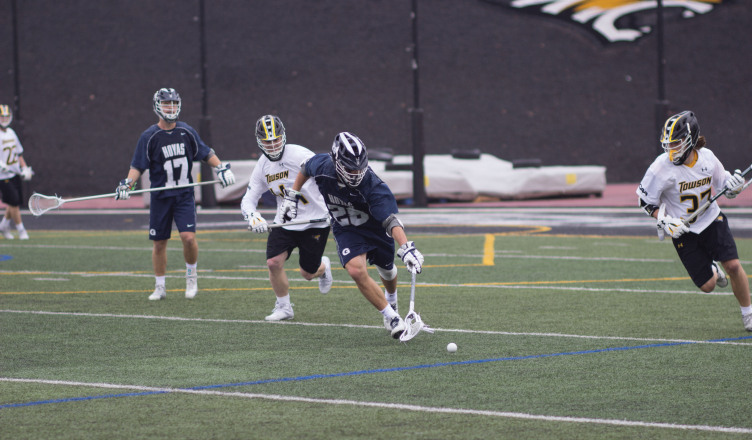 The Hoyas (3-0) notched the first goal of the game on their first possession, but the Tigers (1-2) responded quickly as freshman attacker Phil Wies scored off a feed from junior attacker Brendan Sunday.

Georgetown took back the momentum when sophomore attacker Jake Carraway ripped a shot from well beyond the cage to record his 10th goal of the season. Georgetown scored on its next possession as well to take a 3-1 lead.

“Very uncharacteristic of a Towson defense,” Head Coach Shawn Nadelen said. We’re not playing good team defense. We’re not staying disciplined and fundamental on ball. We’re not doing a great job of reading when we need to support [and] when we don’t. We’re just not on the same page, and that’s something we’ve got to continue to work with and figure out.”

Towson finished the period on a 4-0 run sparked by an unassisted goal from Wies with just over five minutes left in the period. Wies scored twice during that run to record his first career hat trick as the team took a 5-3 advantage going into the second quarter.

The Hoyas answered with a 5-0 run as they regained control of the game. Junior attacker Daniel Bucaro registered three goals and one assist during that run, giving the road team a three-score lead with just over four minutes left to play in the period.

“In the first half, we just weren’t being ourselves,” junior defender Chad Patterson said. “We knew what they were doing. We knew the game plan. We just didn’t execute.”

Despite the impressive play from the road team, junior midfielders Grant Maloof and Jon Mazza helped Towson fight back before halftime. Maloof registered an assist to Sunday, and Mazza scored an unassisted goal to make it an 8-7 going into the break.

Mazza continued his strong play with another unassisted goal to tie the game early in the third. Georgetown regained the lead with a score midway through the period, but Mazza knotted up the score again with his third goal of the day.

The Tigers switched to a zone defense to open the fourth, but the Hoyas still managed to break the tie with a goal from senior midfielder Craig Berge early in the period.

Carraway recorded his second goal of the day just three minutes later to give the Hoyas an 11-9 advantage with 10 minutes left to play.

The home team responded with a tough goal as junior attacker Timmy Monahan sprinted around the opposing cage and hit a shot fading away with a defender on his back, cutting the deficit to one.

Georgetown refused to let Towson complete the comeback as Bucaro added another goal to give his team a 12-10 lead with three minutes left to go.

“We just need to keep working as a team to try to get that consistency all the way through the game,” junior midfielder Zach Goodrich said.

The Tigers burned themselves in the final minutes with two late turnovers, one of them unforced, as the Hoyas held on for the win.

Towson looks to bounce back when the team travels to the Ridley Athletic Complex for a matchup against Loyola Wednesday afternoon. Game time is set for 4 p.m.

“I really have no idea with how we’ll respond,” Nadelen said. “Every game has been a little bit of a mystery going into it seeing how we play at this point. I’m confident in these guys [that] we’ll get on track. With a quick turnaround against a very talented and dangerous team like Loyola, it takes all your attention.”