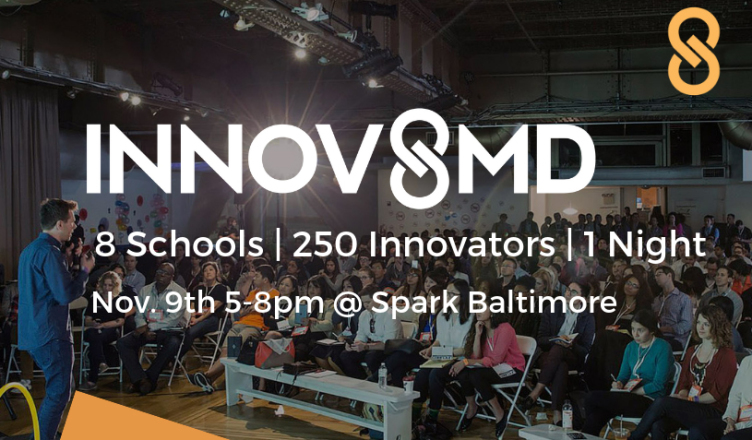 Spark Baltimore, a coworking space in the Powerplant Live!, will soon be home to the first ever Innov8MD conference, a student run event meant to bring universities from across the state together in an effort to develop a stronger entrepreneurial ecosystem.

According to Towson University student and conference co-founder Matthew Lowinger, the idea for the conference came after a few Towson Students attended a conference at Johns Hopkins University, which sparked the desire to create closer ties between the two universities. Lowinger teamed up with Johns Hopkins’ student Pava LaPere, and they came up with the idea for Innov8MD.

Lowinger is also the Lead Associate for Towson’s Student Launch Pad, where he handles “a lot of day to day operations, special projects,  stuff like that.”

The conference, which will include eight schools from across Maryland, will showcase student started companies and ventures from universities across the state in an effort to “celebrate what college students are building,” said Lowinger.

Jan Baum, a professor in the College of Business and Economics, said that she hopes the conference sets a tone for student entrepreneurship across the state, as well as one that augments the different strengths that people bring to the table.

“Innov8MD is the first of its kind, inter-institutional conference dedicated young entrepreneurs,” Said Baum. “Much has been done in Maryland to build an innovation and entrepreneurial ecosystem but people have been waiting for someone to come along and create a forum for college and university entrepreneurs.”

The conference will be broken into sections, with areas for students and community members to network, seek advice and resources for their own projects, and to see what companies students have brought to the table.

“Out of the eight schools, [each with] up to five student started companies, they will be showcasing their product, their venture, whatever,” Said Lowinger. “So that’s a total of 40 of the top student companies across the state.”

There will also be a keynote speaker, time to network, and a mentorship area.

“Starting at 5 o’clock everyone’s going to come in to spark Baltimore… there will be a networking event to start off, seeing all 40 companies, and then the whole program is going to start,” said Lowinger. “So me and Pava… we are going to be MC’s and kick things off and be cheerleaders for it and everything.”

Sophomore and Business Administration major Jazmin Phillip believes the conference is good for the community.

With more than 10 sponsors, Baum sees the conference as being something that will continue to grow, and even expand, into hackathons, competitions, and other formats.

“The community is galvanized around this effort,” Baum said. “Mike Binko, Founder and CEO of Startup Maryland said, ‘We’ve been waiting for someone to stand this up.’ Innov8MD has support from major state stakeholders like the Dept of Commerce and TEDCO as well as the broader regional entrepreneurial community. Hopefully this is just the beginning.”

Students and community members can buy tickets to the event, which will take place on Nov. 9, 2018. Prices start at $10 for students with a valid high school or university ID, and $25 for members of the communities. Registration for the event, and can be done at www.mt.com/innov8md.