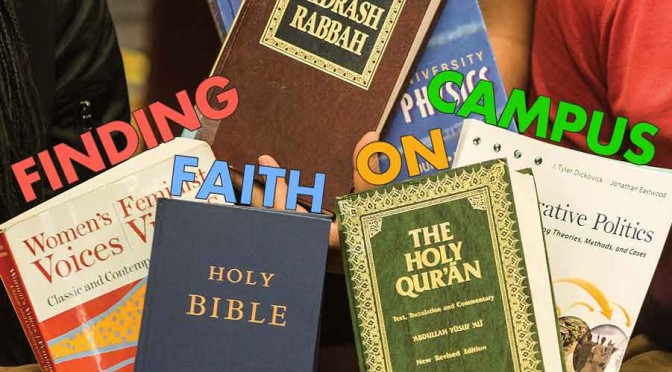 A few weeks ago, The Towerlight talked with Muslim students on campus about how they have been impacted by cultures of misunderstanding and Islamaphobia–and how those experiences are unique compared to the rest of Towson. This week, we’re talking about what it means to be a religious college student. This is a survey, not a comprehensive study. Not every group that we reached out to responded–this story is built out of those we were able to speak with.

“Our purpose on this campus is not really to push one religion or the other,” Kirmani said. “What the group is interested in is providing an atmosphere which is conducive to students expressing and experiencing their spirituality.”

These organizations aim to coordinate event-planning within Towson’s campus ministry groups and create a spiritually welcoming environment for people of all faiths and religious traditions. Throughout the year, ICMA keeps an  “ear to the ground” to see where interfaith movements and programs may be appropriate, Kirmani said.

Other groups working toward interfaith communication include the JAM student group, or “Jews and Muslims,” which focuses on providing a safe space for dialogue and organizing programs that highlight the similarities and differences between the two faiths. The group encourages students and staff to have open minds toward different traditions.

“If you don’t have an open mind, it can kill you,” Kirmani said. “You’re never going to find two people who will agree with you. That’s been my experience.”

For religious students at Towson, faith is defined by feelings of stability, acceptance and community. For many, religion provides a firm foundation that practitioners can turn to when life gets rocky, which can be the case in a new college environment.

“As a college student, I am distracted by schoolwork,” Cru student leader Elizabeth Terrell said. Cru is an international Christian organization. Towson’s chapter meets for worship at 8 p.m. on Thursdays and has over 100 active students who participate in worship or other meetings.

“I am distracted by social events outside of Cru,” Terrell said. “ And the freedom that college allows is so distracting, it can be an opportunity or it can be inhibiting.  I take those as opportunities to be God’s love in a physical body form.”

According to Student Government Association Treasurer Rebecca Ellison, only three religious groups on campus have SGA budgets this year: Catholic Campus Ministry, Cru and Hillel. Combined, their total budget is around $6,000.

The total SGA budget for student groups is, according to the 2015-2016 academic year budget, over $200,000.
According to the student groups that responded to The Towerlight’s interview requests, membership in religious groups has remained relatively steady. Advisers said that numbers fluctuate, but nobody noted a large or worrying drop.

Only the Secular Student Alliance, a group that has “always been rather small,” according to one member, reported a decline in membership.

Alexandra Heverly, a member of SSA, said that one reason that membership may have been low was the way they advertised.

“A lot of people associate the word ‘secular’ with atheism, so people get the vibe that our club is a bunch of atheists getting together and being cynical about religion,” Heverly said.

Instead, Heverly said the group delves into controversial issues including religion’s effect on politics, abortion and LGBTQ+ rights. A new advertising campaign for the group has brought in a few new members, and Heverly hopes that more will follow.

“To avoid the lack of interest due to stigma we eschewed the mention of atheism at all from our advertising,” Heverly said. “It actually worked, we had a lot more people join our emailing list than we have in the past few semesters.”

The students that The Towerlight was able to speak to represent different religious backgrounds and beliefs, but they all spoke of a handful of commonalities, regardless of faith. Community, acceptance and stability were all repeated themes. Students also spoke about giving back to campus, the surrounding area and beyond.

“I think religious organizations are starting to lose the stigma that you have to be very religious to be a part of them,” Sydney Dinetz, a member of Jewish group Towson Chabad, said. “It’s become more of a place of commonality for people.”

A number of the religious groups look for ways to interact with the surrounding community.

Campus ministry group Young Life is focused on building relationships with students at area public high schools by attending their extracurricular activities and making an effort to get to know them. Olivia Smith, a Young Life leader, said that the organization’s main goals are to connect with high school students and “show them that they have purpose and ultimately to try and share with them Jesus.”

“When we’re going to the high school, we’re trying to get to know the kids,” Smith said. “I know it sounds cheesy, but we love them for who they are. High school is a rough time, so we’re trying to reach out.”

The first Saturday of every month, Campus Catholic Ministry, which offers Catholic mass services in the Newman Center, located across York Road from Stephens Hall, and in the Union’s Loch Raven room, holds a “Saturday of Service” in the community.

Earlier this month, the Muslim Student Association packaged food and hygiene products in an event they called “Feeding Our Neighbors.”

The Table, a Lutheran-Episcopal group on campus, hosts a community dinner every month, open to anyone.

“We encourage people around the Towson community and the Baltimore community who may not know where their next meal is coming from to come and eat with us and talk,” freshman Alex Harrington said.

“Once I got to Towson, I made that choice on my own to be involved with something,” Lifshitz said. “It was more of like, finding a community. Yes, I’d go to Shabbat dinners every week where we’d do a Friday night service, but like the main emphasis for me was finding that community I can connect with.”

“When I started going to The Table I didn’t know very many people here on campus,” Harrington said. “I’m a freshman and it was my first semester, so everything was crazy. Then I started to meet more people, and get more involved, and helped grow in leadership, and I felt more loved and accepted than I did just hanging out in my dorm room all the time.”

Father Matt Buening, who works with the Catholic Campus Ministry, said that faith is like an “anchor” for students in college.

Despite these benefits, some students feel that there are certain stigma or misconceptions that surround their faith.

“The Christians that you see most often in the media are the ones running around with signs saying things like, ‘You’re all burning in hell’ and things like that, so there’s a lot of stereotypes that go along with that,” Harrington said. “And sometimes in some cases those are true, but that’s not true here at all. I think sometimes that turns people off to exploring and talking to other people about their faith or religion.”

Cru Advisor Larry Kelly spoke about a culture shift at universities, where some people no longer look as fondly on religious practice as they did in the past.

“As our culture is changing, it is going from a university of ideas and coming together to discuss, to almost like that everyone must think the same way or follow the culture in a certain way,” Kelly said. “There are certain things that we hold true that might be offensive. We want to hold fast to what we see is true in the Bible.”

But when confronted with opposition or stigmatization, students look to respectfully break down misconceptions.
“I think that as a student when I say that I’m a Christian, I am in a community that is accepting,” Terrell said. “I have faced some stereotypes but I think stereotypes are just opportunities to show truth.”

In addition to stigma, some on campus religious groups have faced harassment from peers. Lifshitz noted October 2015, when someone wrote anti-Semitic slurs on the public chalkboards in Freedom Square. Following the incident, Hillel worked with the Office of Civic Engagement to create an open forum event, where students could voice their concerns and opinions about what had happened.

The group also spread an image of the text online and held an event called “Take Back the Board,” which involved spreading positivity about others, according to Lifshitz.

“It was really amazing how everyone wrote all these positive things on the board,” Lifshitz said.

Muslim students have also reported incidents of discrimination on campus and inside classrooms, according to Kirmani. Notably, women wearing head coverings are sometimes catcalled, he said.

In 2012, then-senior Matthew Heimbach led an effort to create a White Student Union on campus. Heimbach, recognized as an extremist by the Southern Poverty Law Center, drew controversy by chalking messages of “white power” and organizing a student patrol to fight back against what he described as a “black crime wave.”

Kirmani said that during this time, Muslim students received police protection while they prayed, and that members of both the Black Student Union and Hillel later came out to stand guard.

“That was one kind of event where we found out that the Towson University students have a much bigger heart than one could ever imagine,” Kirmani said. “Irrespective of the religion, of national origin or ethnicity, students and staff were all together supporting each other.”

–Cody Boteler and Sam Shelton contributed to this article.