The Vancouver Canucks are having a quietly successful season. They’ve compiled 65 points in 56 games, and currently hold a one-point lead over the Edmonton Oilers and Vegas Golden Knights for first place in the Pacific Division. The Canucks went from being one of the oldest teams in the league that seemed to be on a downward slope, to a now young and exciting group of players.

Vancouver being good is no anomaly, they have been incredibly good when it comes to drafting and have made very smart trades along the way as well. In 2017, they drafted center Elias Pettersson and the following year defenseman Quinn Hughes. Two players who weren’t highly sought after at the time, but now look like they both would have warranted going first overall. This is especially the case for Pettersson, who has been an absolute superstar in the two seasons he has been with the team.

They also traded for 26 year old centerman J.T. Miller from the Tampa Bay Lightning. Miller has played a pivotal role on the team this season and has been reliable in both goal scoring and assists. He has 21 goals thus far which is second most on the team behind Pettersson. He also has 33 helpers, which are tied for the team lead in that category.

Then we look at the potential rookie of the year candidate, defenseman Quinn Hughes. Quinn is the older brother of last year’s first overall pick center Jack Hughes. Many believe that Jack is the better of the siblings, however, Quinn has thrown a wrench into that conversation this year. The 20-year-old defenseman has exceeded expectations this season for the Canucks and has made an immediate impact.

His speed and creativity on the ice is part of what makes Vancouver so dangerous when attacking. His ability to create space and find ways to get his teammates open looks at the net almost makes it seem like he’s a veteran. Looking at Hughes’s stats, you would never guess he is a defenseman. Hughes is the other player alongside J.T. Miller who leads the team in assists with 33.

What’s been so great about Hughes this season is his progression throughout the year. Hughes has done more than enough to show he can be relied upon in the late stretch of the season and beyond. Hughes and Colorado Avalanche rookie defenseman Cale Makar are in a neck and neck race to be named rookie of the year. The two are tied for league lead for scoring amongst rookies with 41 each.

Another thing that has been pivotal for the Canucks is consistency in front of the net. Jacob Markstrom has been solid for Vancouver this season. The numbers are not eye popping, with a 20-16-3 record and a 2.83 GAA, Markstrom has seemingly been perfectly mediocre. It has been enough to keep Vancouver competitive every night, something they can’t say about past seasons.

Ever since the departure of longtime goalie Roberto Luongo, the Canucks have struggled to find any kind of success in front of the net. This season, they have continuity at the position, and with the offense rolling as it has been; that’s all they’ve needed. It also helps the team get better defensively as well, which takes the pressure off of Markstrom. In order to make a playoff run, Markstrom is going to have to find another gear before the postseason rolls around.

Vancouver’s front office has done an unbelievable job with stockpiling young talent. This team has productive players on every line, and their top six is legitimately dangerous. Their second line of Miller, Pettersson, and right winger Brock Boeser is one of the most productive in the league; and has been one of the main reasons for the Canucks success this year. They’ve done a spectacular job of mixing this young talent with high-character veterans who have solidified the locker room.

Vancouver is on a four-game losing skid right now, but look for the Canucks to come alive to close out the regular season. It will be interesting to see if these young players can withstand the marathon that is an NHL season. Even if Vancouver falters at the end of this season, expect this team to be a real problem for years to come. 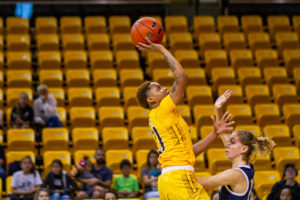