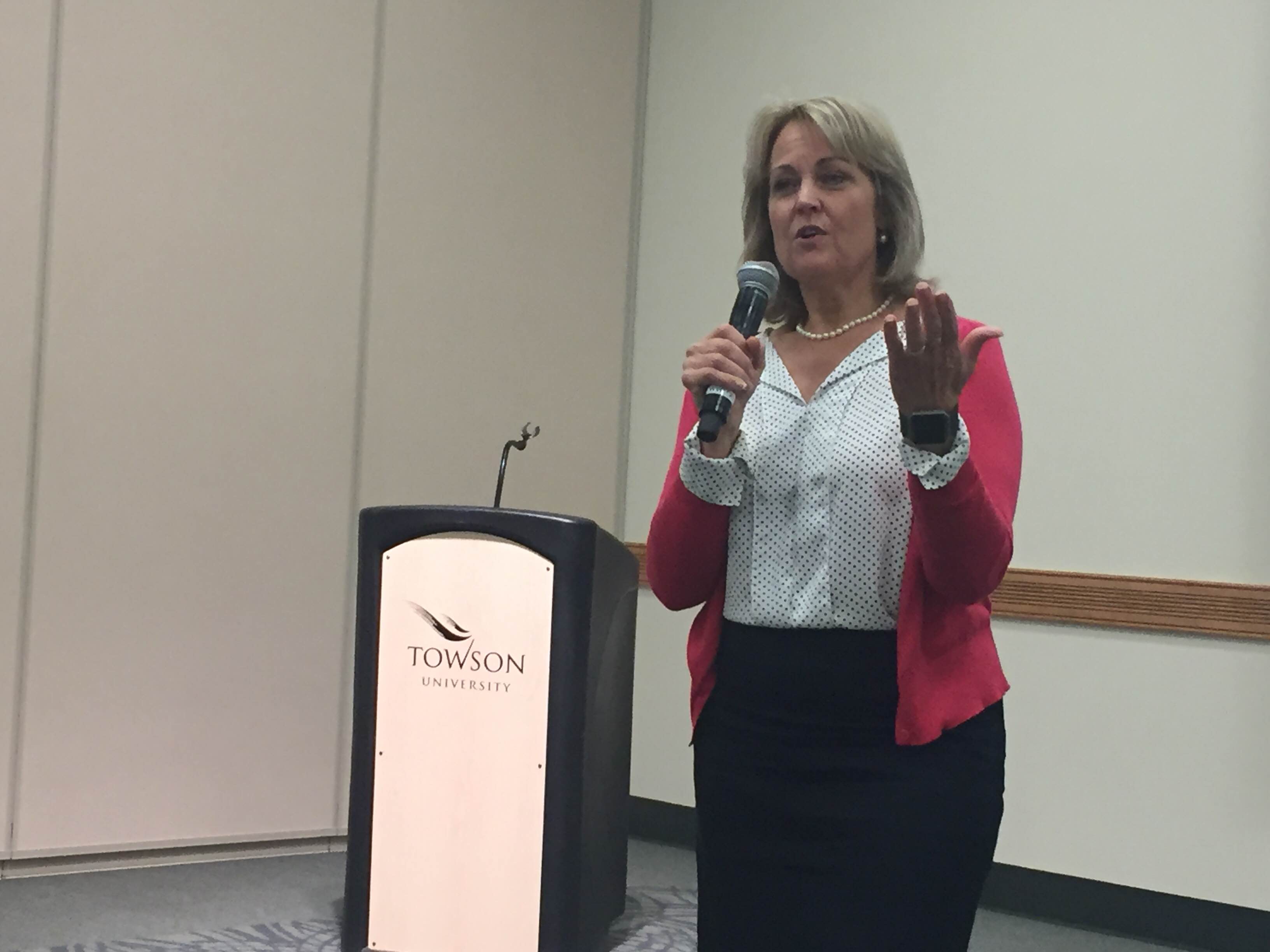 “I’m proud to be an alumni,” Szeliga said in an interview. “There’s a lot of Marylanders that go to Towson, so a lot of voters are here.”

As she spoke to the class, she spent some time discussing the current political climate and focusing on her campaign, which she’s tried to keep positive.

Vatz teaches rhetoric, and Szeliga, who stood at the front of one of the ballrooms in West Village, engaged the audience as they discussed a handful of political ads.

Afterward, she took some questions from the audience—though, perhaps surprisingly, none about Donald Trump. Friday, in a radio debate with Democratic candidate for senate Chris Van Hollen, Szeliga reiterated her support of Donald Trump in the general election.

“Just like Congressman Van Hollen is supporting his nominee, I’m supporting my nominee,” Szeliga said during the debate.

Later that evening, after the debate had aired, news of the leaked “Access Hollywood” Trump tapes broke.

Dozens of Republicans have since denounced the candidate and rescinded their support of him. Gov. Larry Hogan, who has endorsed Szeliga, has said that he is not supporting the Republican nominee for president. Last year, Vatz arranged for Hogan to come speak on campus.

As of arly Monday morning, Szeliga has not publicly said anything about her stance on Trump post-“Access Hollywood” leak.

While not one of her major platform planks, Szeliga was able to discuss some of the perils facing higher education with The Towerlight.

“I think we need to bring some accountability,” Szeliga said in an interview. “I mean, nobody talks about the cost. When I went here, the cost was a fraction of what it is today.”

She said she wanted to look at the way that degrees are connected to the workforce.

“When you get a degree in this, what is the job that you’re going to be prepared for?” she asked. “I’m worried about students graduating without knowing that information.”

And, as she took questions from students after her presentation, some students grappled with the fear of not being able to find a job after graduation.

“There are a lot of jobs that are available,” Szeliga said. “I hope that Towson University is telling you what they are.”

She said there are millions of available jobs in the country—many that are in the trades, like electrical or plumbing work. She said she’d like to see high schools begin teaching trade work again.

One of the main issues listed on Szeliga’s campaign website is protecting Maryland agriculture—something especially important on the Eastern Shore.

“Agriculture is such an important, important part of our economy, and it’s important we protect our food supply,” Szeliga said in an interview.

Asked how she’d balance protecting the Chesapeake Bay—another critically important part of the Maryland economy—with preserving state agriculture, however, she defaulted to defending agriculture, saying, “Having a safe food supply and a reliable food supply is so important, we have got to protect agriculture. I don’t want to be eating food from other countries when we have so much valuable land here.”

Szeliga, the minority whip in the House of Delegates, and Van Hollen, a member of congress since 2003, are scheduled to appear in a televised debate Oct. 26 on WJZ.