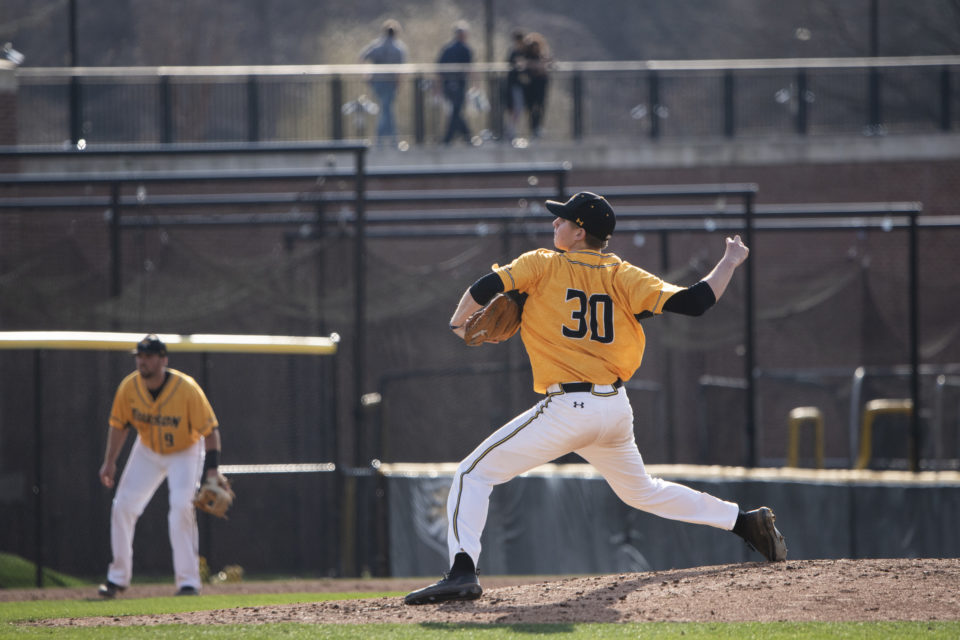 Towson welcomed a local rival in UMBC on Tuesday at John B. Schuerholz Park.

“This is a big win, a sweep of a local in-state team matters,” said Assistant Coach Miles Miller. “They swept us last year, so this was a big game for us to get some momentum back and the way we won it was really good.”

The Tigers swung a heavy stick with senior utility Richard Miller’s third home run of the season, a solo shot in the bottom of the second, giving Towson a 1-0 lead.

Freshman starting pitcher Dallas Repine, who carried a no-hitter into the eighth inning in their last meeting, was pulled in the fourth inning after allowing a solo home run. Miller said the early pull was due to a pitch count Repine was on so he is available for the weekend.

“We wanted him to develop in the midweek and he’s done an awesome job getting better every week,” Miller said. “He was on a pitch count and we said it was going to be 50 and on pitch No. 51, the kid hit it out of the ballpark so that’s my fault. We plan on him helping us in the bullpen this weekend.”

Senior pitcher John Cranston came in for relief but surrendered a two-run home run as UMBC took a 3-1 lead.

The Tigers started the bottom of the fourth well with a single by senior infielder Zach Piazza and an RBI triple by Junior infielder Noah Cabrera. However, Cabrera was stranded at third base.

After the Retrievers extended their lead to 6-2 in the fifth, junior outfielder Tom Flacco launched his first collegiate home run, a solo bomb to right field to lead off the bottom of the fifth.

“I haven’t had that feeling in five or six years,” Flacco said. “It’s nice to have one of those that you hit off the bat and know it’s gone.”

Flacco, who has struggled hitting at home this season, finished the game with three hits.

“I don’t think it’s anything about being at home, I just need to get comfortable in the box again, today was a big step in getting there,” Flacco said.

Towson loaded the bases and a Cabrera sacrifice fly brought in another run to pull the Tigers to within two.

A pair of UMBC wild pitches brought home one run for Towson. Junior infielder Brad Powers ripped an RBI triple into the right-centerfield gap to tie the game at six in the seventh. Powers’ intensity as he reached third fired up the entire bench.

“One thing about Brad, he really cares about his own performance, his teammates and the program,” Miller said. “He was mad at himself for missing that popup in foul territory the inning before and he wanted to make up for it and that was a huge hit.”

The Retrievers regained the lead with a solo home run off junior pitcher Kody Reeser in the eighth inning. The Tigers wasted no time getting the lead back, scoring two runs in the bottom of the eighth to take an 8-7 lead into the ninth inning.

Sophomore pitcher Jake Pecilunas was called on to get the save. UMBC’s leadoff hitter reached base but Pecilunas forced consecutive pop outs before closing the game by picking off that leadoff runner at first base, Towson’s second successful pickoff of the game.

“Pec probably works the hardest of all our pitchers on his pickoff move,” Miller said. “We’ve been working with him on doing it after a hold, not on the way up, because it is really quick, and he’s been working on it and he finally held long enough today to get him.”

The Tigers, winners of seven of their last 10, welcome the William & Mary Tribe this weekend for a three-game series that kicks off on Friday, April 26 at 3 p.m. at John B. Schuerholz Park. 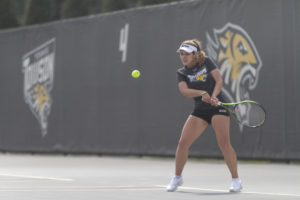