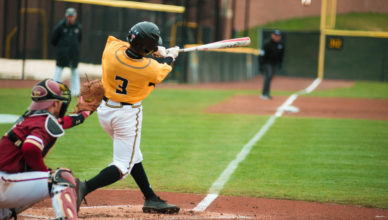 The Tigers traveled to Norfolk, Virginia for a three-game season-opening series against the Old Dominion Monarchs. The Monarchs defeated Towson in all three games, shutting them out in the final two.

“There were some really positive things, but we just let some plays get away from us and the games kind of slipped away,” interim head coach Miles Miller said.

On Sunday, Old Dominion scored in the first inning and never looked back, defeating the Tigers 11-0. While the Monarchs recorded ten hits, Towson only had four and struck out 14 times.

“It’s frustrating,” Miller said. “We have to do a better job. We can’t strike out as much as we have.”

One of the few positives for the Tigers was the play of junior infielder Brandon Austin, he led Towson with 10 putouts, including a double play in the second.

An error by senior infielder Noah Cabrera in the seventh allowed two runs to score, a wild pitch advanced the runner to third on the next at-bat. Old Dominion took advantage, scoring another run to increase their lead to 7-0.

“We have to throw more strikes,” Miller said. “There were way too many walks.”

Both teams remained scoreless until the bottom of the fifth. Old Dominion hit a two-RBI double in left field. Later in the inning, a throwing error added another run to the Monarchs score.

“If we can be a little cleaner, throw more strikes, and put the ball in play more, we’ll have a better result,” Miller said.

The Tigers opened their 2020 season on Friday with a base hit by freshman catcher Burke Camper. Old Dominion responded with six runs in the fourth inning. The Monarchs took advantage of a fielding error and a stolen base.

Despite a slow start to the season, Terrents is trying to remain positive and encouraging.

“The way I stay motivated is honestly staying positive,” Terrents said. “If someone makes an error, we just pick them up and get ready for the next play.”

A double by Cabrera in the sixth, and a triple by Austin scored three of the five Towson runs.

“We just gotta keep practicing and come out and do well next weekend,” Terrents said.