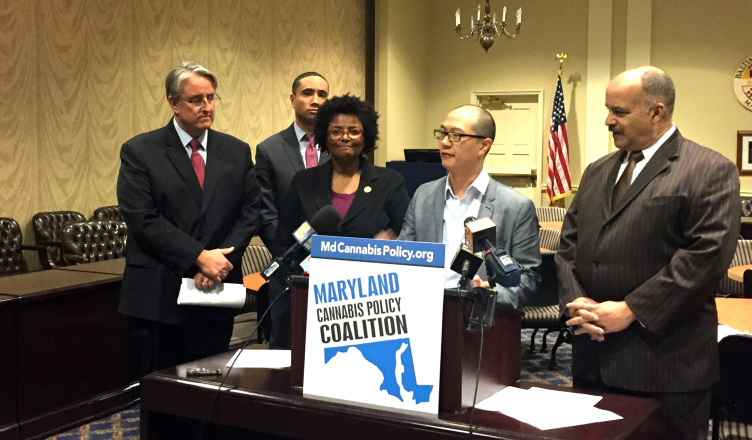 Gov. Larry Hogan’s popularity has dipped, support for legalized recreational marijuana is up, and 60 percent of Marylanders support a $15 minimum wage, according to results from a new Goucher poll.

“Speculation over a ‘Trump effect’ on Governor Hogan’s approval ratings and reelection efforts has certainly ramped up over the last month,” Mileah Kromer, director of the Sarah T. Hughes Field Politics Center, said in a statement. “Although there have been direct efforts to attach Governor Hogan to President Trump and the majority of Maryland voters say that their views toward President Trump will influence their vote in 2018, the governor remains largely unaffected by national politics.”

“I think we’re seeing a huge change nationally, as more and more states come online,” Bell said in an interview. Eight states and Washington, D.C., have legalized recreational marijuana use.

Currently in Maryland, marijuana is decriminalized, if in an amount of ten grams or less.

Earlier in the session, a group of Maryland lawmakers introduced provisions in the House of Delegates and the Senate to legalize recreational marijuana.

At the time, campus officials told The Towerlight in an email that the University would “assess and evaluate” how legal recreational marijuana would effect campus.

“Keep in mind, this is a non-smoking campus, and those rules apply to all forms of smoking,” Senior Director of Communications and Media Relations Ray Feldmann said.

If approved, the measures would regulate and tax marijuana much in the same way that alcohol is taxed and regulated.

Hearings are scheduled for the bills in the house and the senate for early March.