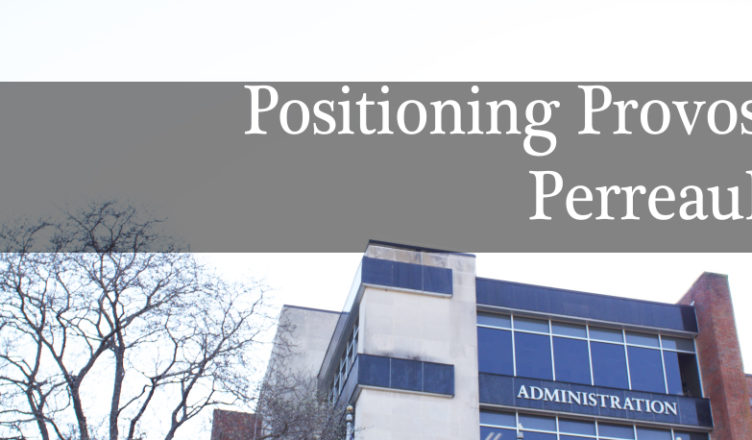 Photo by Bailey Hendricks/ The Towerlight, Illustration by Victoria Nicholson

When she first found out that she had gotten the job as Towson University’s new provost and vice president of academic affairs, Melanie Perreault said she probably jumped up and down while trying not to hurt herself.

“This is really a dream job for me,” Perreault said. “It’s going back to my roots. I was actually born down the road from Towson.”

After a national search to fill the position, Perreault, then the Buffalo State College provost and vice president, accepted Towson University President Kim Schatzel’s offer for the job and will begin her appointment Feb. 18.

“It’s a big job,” Perreault said. “It’s going to take time to… gather some information, learn a little more about what’s going on on the campus.”

Schatzel, who formed a search committee to help her fill the position, announced in a letter to the University that she was pleased that Perreault had accepted the position.

“As the university’s executive vice president, the role also serves as the university’s second-in-authority responsible for TU’s future success,” Schatzel said. “The search committee and process confirmed that Dr. Perreault fulfills all of those capabilities and qualities.”

Perreault will bring with her more than 21 years of experience working in higher education. Including her role at Buffalo State College, Perreault served as the associate provost at Salisbury University.

She will be taking the place of Dave Vanko, who has acted as Towson’s interim provost during Schatzel’s search to find a permanent person to fill the role. For Schatzel there was no one better.

Despite her excitement, Perreault admitted that being part of administration wasn’t always where she saw her career going. When she began her college career, Perreault planned to be a high school English teacher.

“I, like just about everybody, picked a different major than what i started out,” Perreault said. “Then I took a history class as a gen-ed just because I had to and it turned out I loved it.”

She went on to become a history professor at Salisbury University, where she moved up the chain of command into administrative positions.

“When I got into administration, I started as a department chair,” Perreault said. “It was only then that I started thinking ‘well, I kind of like this administration thing.’”

Perreault feels that being an administrator gives her the energy and drive to affect change at her institution.

Yet, she doesn’t plan to jump right into making changes at TU. Instead, she wants to start by meeting students, faculty and staff in order to get a feel for Towson’s culture and needs.

“I had a great opportunity to meet a lot of people during the interview process, but it’s another thing when you get onto the campus and really start to dig in and meet with people,” Perreault said.

She plans to explore campus to meet with its members in their space, rather than summoning people to her office which she believes is not always productive.

“I think people generally feel safer on their own ground really talking about their issues,” Perreault said. “So i think getting out and really talking to people is going to be the first order of business.”

Amitra Wall, who worked closely with Perreault as her associate provost at Buffalo State College, said that while she will miss her greatly, Perreault has a lot to bring to Towson’s campus.

“When I first met her I had that initial ‘hmm, she seems interesting,’” Wall said. “Shortly after, I was struck by her willingness to listen to individuals.”

Wall mentioned that Perreault brought a humor and wit with her that made Wall realize that she had a huge heart, and that students and staff often seemed at ease around Perreault.

“I was able to observe her in action when we had meetings across campus, in the community and in the provost suit, and I can say that she is down to earth and real,” Wall said.

To help students feel like they can come to her with concerns, Perreault makes it a priority to treat them just as she would faculty and staff by always following up with them.

“One of the things that people hate most is if they come to you [and] they have a concern… and then the receiver says ‘thank you for your concern, i’ll look into it’ and then there’s no follow up,” Perreault said. “If i say i’m going to look into it, it’s not going to be an ‘i’ll look into it and then just go on with my day.’ I’ll respond back and say ‘alright, well here’s what i found. Here’s what i discovered.’ And sometimes the answer isn’t what people necessarily want to hear, but you’re always going to get an answer.”

Giving feedback is Perreault’s way of making sure people know that speaking with her matters, even if it doesn’t lead to an immediate change.

According to Wall, Perreault’s priorities revolved around providing a quality education for students.

“She’s candid and she will ask individuals, for example, ‘well why are you doing what you’re doing if it’s hurting our students?’” Wall said. “‘Let’s relook at what we have done for years and question what we do.’”

Wall also said that, for Perreault, it’s not just about the students. It’s also about the parents who help pay for their children’s education and about faculty.

“She cared for faculty and staff and their needs,” Wall said. “She didn’t make false promises. She just was honest.”

In her letter, Schatzel said that she and the committee shared a goal to find someone with not only a strong vision for academic excellence, but also an understanding the role TU plays as an institution for Greater Baltimore and Maryland.

Though she was born just down the street from TU, Perreault only lived in Towson when she was a baby. Nevertheless, she has been able to watch Towson grow into what it is today through annual summer trips to visit her grandmother and by keeping tabs on Towson’s development.

“The general direction of where Towson is going, just becoming really embedded in the community and the connections between academics and the surrounding area I think has huge potential,” Perreault said. “I’m excited to see where that goes”

According to Perreault, when a major amount of manufacturing jobs left Baltimore, it created massive amounts of unemployment. People moved out of the city, and large areas were left abandoned. Now, people are starting to become more interested in living in the city again creating an urban renewal.

Perreault has watched a similar movement happen in Buffalo, and looks forward to watching how Towson helps the community move forward.

“We have very smart people, energized students, some resources and we ought to martial everything we can to make the surrounding environment a better place,” Perreault said.