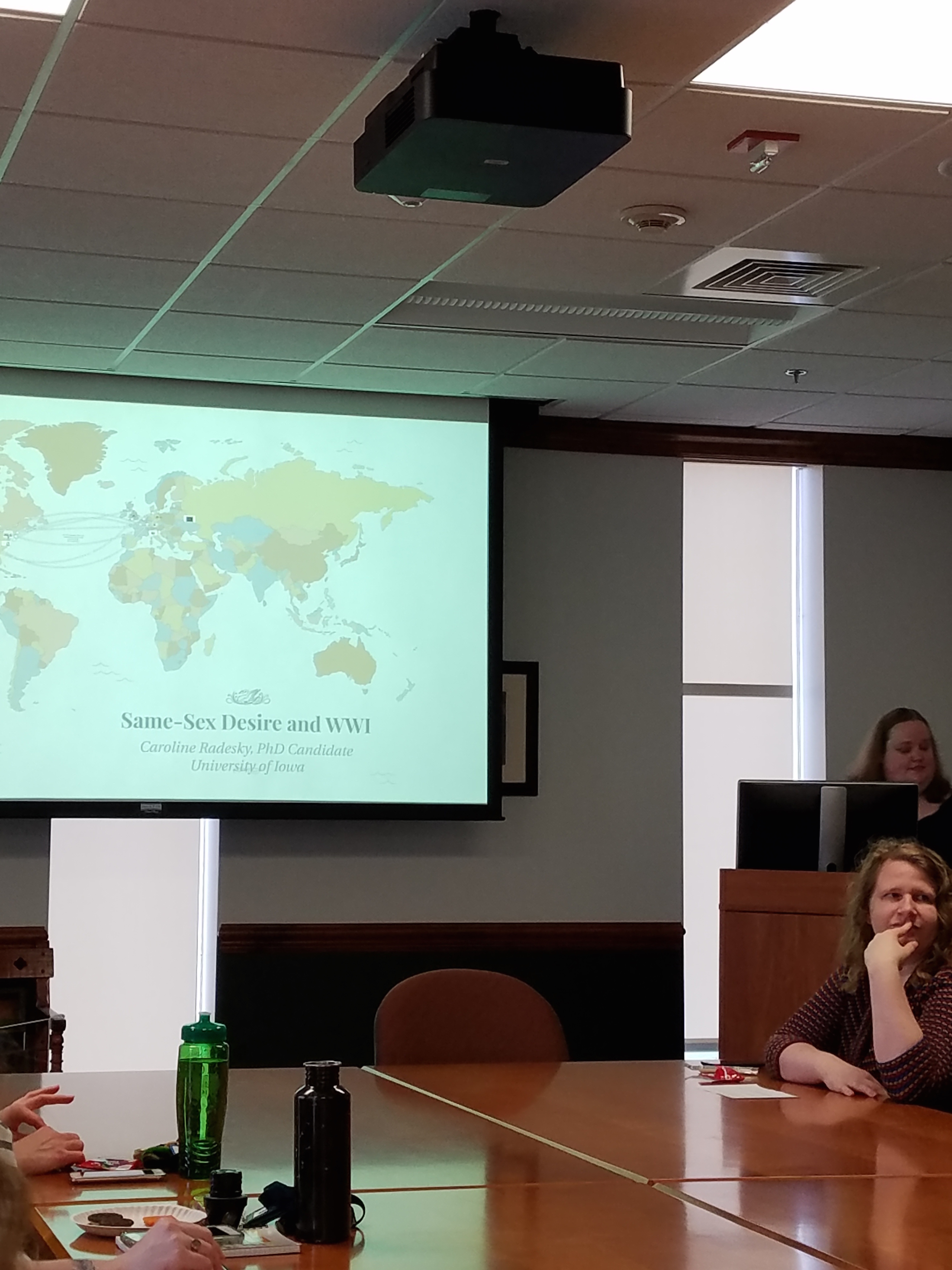 While the gay rights movement is often thought of as having begun after World War II, the movement is rooted in World War I, according to Caroline Radesky, a doctoral candidate at the University of Iowa.

“[WWI] solidified the queer identity and allowed it to take root in the rest of the 20th Century,” Radesky said during her presentation “Same-Sex Desire and WWI,” at Cook Library March 28.

In the late 19th and early 20th centuries, new generations flocked to urban areas and developed sexual subcultures, including queer subcultures. Radesky said that young people were “attracted by the anonymity of big cities,” which were rich in culture and language.

Radesky told the story of Henry Gerber, a same-sex desiring man who attempted suicide by taking poison. He woke up in an asylum, where he was subjected to electroshock therapy and chemical castration. Gerber was given the ultimatum of going to an internment camp for enemy aliens during WWI or enlisting in the military. He chose the military.

While stationed in Germany during WWI, Gerber met other same-sex desiring men, including Magnus Hirschfeld, a Jewish German physician and sexologist who founded the Scientific-Humanitarian Committee, the first LGBT rights organization in history.

In 1924, Gerber founded and served as secretary of The Society for Human Rights, an American LGBT rights organization, but soon after Gerber circulated his “Friendship and Freedom” newsletter to publicize the Society, police arrested him, along with other members of the organization. They were eventually released, but the organization disbanded.

During WWI, the U.S. saw homosexuality as a disease. Same-sex desiring people, particularly those who were part of the working class, were imprisoned or institutionalized. Doctors prescribed “treatments” such as forced sexual intercourse with the opposite sex, castration (chemical and otherwise), electroshock therapy, lobotomies, mercury ingestion, and sometimes prescribed suicides, according to Radesky.

Worried that same-sex desire was contagious and that effeminate men “couldn’t handle war,” the military relied on sexologists to detect and weed out same-sex desiring soldiers, Radesky said.

“Instead of policing sex acts, the United States was policing a malady and a person,” she said.

Radesky said sexologists conducted physical screenings, personality tests and psychological examinations to look for “diminished structure and inferior figure.” Soldiers who lacked “masculine” features were deemed homosexual and were discharged from the military.

Those soldiers received a “blue discharge” or “blue ticket,” which was used to remove homosexual service members from the military, but there were still many same-sex desiring soldiers who served in WWI.

“The streets for working class and black women were dangerous because their bodies were never understood as their own,” she said.

Radesky cited President Theodore Roosevelt’s 1905 speech “On American Motherhood” in which he described a “race suicide.” Roosevelt feared that non-white and working class women’s reproduction would surpass that of white women, leading to the downfall of white America.

Radesky said people of color were labeled as over-sexed and sexual deviants just because of their race, making them even more careful than their white counterparts when it came to same-sex relationships.

“I think minority stories need to be told in times like this,” Hines said. “As a playwright, I try to tell those stories.”

Cook Library’s next presentation will be on April 4, featuring Benjamin Warner, a lecturer in Towson’s English department. Warner will discuss his debut novel, “Thirst,” about a couple and their neighbors trying to survive a mysterious drought.