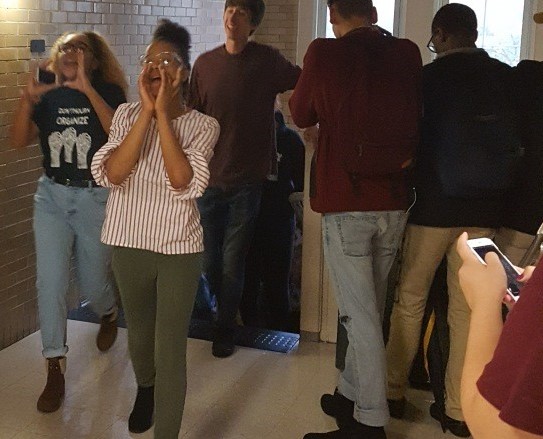 Students protested Towson University’s purchase of furniture made by prisoners during a demonstration on the second floor of  Van Bokkelen Hall on Nov. 7.

Towson University purchases products from Maryland Correctional Enterprises, a state agency within Maryland’s Department of Safety and Correctional Services. State law requires institutions within the University System of Maryland, including Towson, to purchase items from MCE.

In November 2015, a group of student activists led the “Occupy Towson” movement and physically occupied the president’s office to get a list of 13 demands signed with the goal of improving life on-campus for students of color. Then-Interim TU President Tim Chandler and the activists negotiated a list of 12 demands which Chandler signed.

Demand number four, which was completed in spring of 2016, was to send a letter to the president of University System of Maryland Student Council “regarding the review and termination of the contract, vendoring, and purchasing of appliances, tools, furniture and any other items produced within Maryland state and federal prisons.”

Last Tuesday’s protest, almost two years since Occupy Towson, but not affiliated with that movement, raised the issue again. Student protesters said the prisoners are not paid enough for the work they do.

Above the stairwell at one end of the hall hung a sign which read, “Your Fee$ Pay 4 Slave Labor.”

On their first march through the halls, the students shouted in unison, “What do we want? Slave abolition! When do we want it? Now!”

Professor Jennifer Potter’s communications special topics class in social protest rhetoric stacked all the tables and chairs from their classroom in the hallway with signs and statistics about their protest.

Some of these signs read: “Insourcing is cheaper than outsourcing labor to other countries. If a product you own says ‘American made’ it was probably made in prison,” “In 2014, 70 percent of the prison population was black, although only 30 percent of Maryland’s population is black,” and “It is illegal to import products made with prison labor from overseas… So why is it legal to use prison labor in America?”

There were also signs on the doors and down the hall with the social media hashtag #dismantlethedesk.

During the class’s second march through the halls, they chanted, “Hey hey, ho ho, this racist system has got to go.”

“I like what they are protesting,” sophomore mass communication student Marcus Palmer said. “I agree with it because I noticed a lot of furniture was built by prisons.”

Palmer was part of the communications class covering the protest for an assignment.

“I don’t think it’s right for anyone to be forced to work, and forced to work for 15 cents an hour,” Stephen Rabaglia, a senior communication studies major and student of Potter’s class said. “Buying through the prisons is actually more expensive, but the University is legally mandated to. We are starting a petition to cancel the mandate and start purchasing through a different catalog.”

Potter’s class started the online petition and protest to save the University money, and give everyone more information in an attempt to reverse the mandate.

“I think the protest went really well,” Zhanae Allen, a senior cultural studies major and student of Potter’s class and protest said. “The biggest part will be people coming out and seeing everything (the furniture and signs) stacked in the halls. I think that will really drive it home with students.”

Editor’s note: This article has been edited to further clarify the contract between Towson University and Maryland Correctional Enterprises.

The Towerlight has contacted MCE to request a tour of one of their facilities and to speak with prisoners involved with the program. We will update with any new information.

You can read about The Towerlight’s editorial process for this article here.

You can also read The Towerlight’s coverage of how Towson has addressed the related Occupy Towson demand last year here. 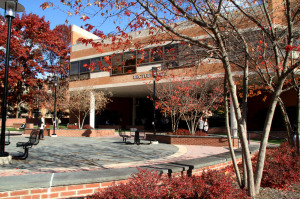