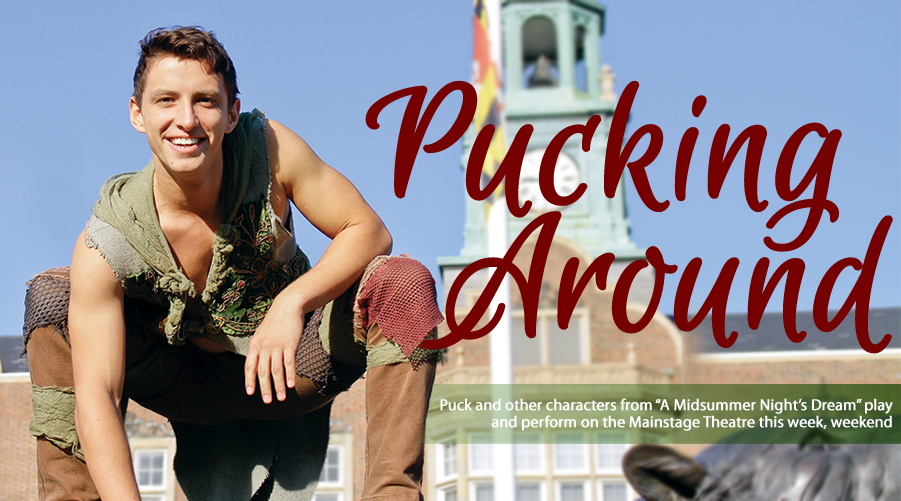 When senior acting major Nick Fruit auditioned for the fall play last semester, he only knew part of what he was getting himself into.

“I didn’t know anything about Midsummer, not even during the audition or the callbacks,” Fruit said. “I knew [a] little bit about the character Puck because that’s who I said I was auditioning for. I knew he was kind of a quirky, mischievous dude and that’s pretty much all I knew about Midsummer.”

Last Friday, Fruit and his fellow cast members brought to life Puck and a myriad of other characters in Towson’s fall production of William Shakespeare’s “A Midsummer Night’s Dream” at the Center for the Arts Mainstage Theatre, running until Oct. 24.

Puck, also known as Robin Goodfellow in the play, is one of the most iconic of Shakespeare’s characters, and drives the drama and mayhem of the plot forward with his meddling.

“Puck loves to play pranks, but he is not an evil guy,” Fruit said. “He just likes to have fun. I could relate that to myself very easily.”

Professor and director of the play, Peter Wray, describes the show as a, “sensual romp romantic comedy where the two worlds of our world and the fairy world collide and are turned inside out. Amazing things happen on this hot, steamy, sexy midsummer’s night.”

The auditions, which took place during the spring semester, required the actors to display their talents to Wray and the other directors in the Department of Theatre Arts.

“I was looking to see if they had a grasp of language,” Wray said. “We asked them to audition with a classical piece that didn’t have to be Shakespeare, but something with a sense of heightened language so I got a sense of how they could connect to it both with a structured high poetic language style, and a genuine authenticity in terms of the emotional approach or tactical approach.”

The callbacks that followed the auditions allowed Wray to see if the actors could handle a sense of comedy in a free and loose environment.

The audition process for this performance also allowed for an unexpected casting choice. Senior Rebecca Clendaniel was cast for the role of Nick Bottom, a townsperson who gets turned into a man with a donkey’s head.

“When I got cast as Bottom, I literally said a curse word when I saw the cast list. I was very much freaking out,” Clendaniel said. “But, that’s why we act. We always want those roles that are going to push and challenge us.”

In the 16th century, when “A Midsummer Night’s Dream” was first performed, men played all of the roles, including the female parts. Here, however, a woman takes on the role of a male character.

“My intention when I was casting the show was actually to suit the best actor for the part so I had no thought about the gender qualities of it,” Wray said.  “I’m not trying to make a political point or a gender point at all. Those were just the people for the roles.”

Clendaniel said that adapting to the role has been an additional challenge beyond the difficulty of adjusting to the old language of Shakespeare’s time.

“Finding a lower voice, trying to find mannerisms, the walk, the talk, the cockiness, but boastful zest of trying to enjoy life that Bottom has, is something that is completely challenging,” Clendaniel said. “But it’s a challenge that I’m enjoying every day.”

The play is believed to have been written between 1590 and 1597, and as the distance between the two worlds of Shakespeare and modern day were melded into one during rehearsals, the cast had to adapt to the older language of the play.

Voice professor Steve Satta was instrumental in this task

“Steve [Satta] would come in nightly and work with the students for an hour or so, turning it over to me, and then we would stage the piece,” Wray said.

This was especially important, Wray said, so that the audience in turn could understand the dialogue thanks to the actors’ complete understanding and portrayal of their lines.

The actors also worked individually to tackle the language of the play.

“I did a lot of script analysis and just made sure I understood exactly what I was saying,” Fruit said. “Even if I had a slight understanding of what the word was, I would still look it up and look at all the definitions to see if there were any other definitions that might better suit what the monologue is about.”

Senior Matt Acquard, who plays Oberon, the king of the fairies, said that Wray provided the cast with a helpful idea to help them get over the language barrier.

“It’s one of the things our director really tries to put in every single one of us, “Don’t act Shakespeare, but just talk to each other,’” Acquard said. “These are individuals that are having conversations, so it’s really not that different from the modern language.”

While the cast had to get comfortable with the language, they also had to get used to maneuvering around the elaborate set design.

“It was a little daunting the first time on the Mainstage because I knew that there were trees and I knew that I had to climb them but do all of it with the lines,” Fruit said. “I found myself losing my breath a lot so it took a little bit of adjustment when we went from the [rehearsal room] to the Mainstage. But once I found a way to do it, it was a lot of fun to just run across the stage and stuff.”

Some of the actors even changed their workout regimen in preparation for the show.

“After I got cast as Oberon I thought, ‘Oh I better start getting into shape,’” Acquard said.

After he began working out and lifting weights every day, Acquard was able to lose 35 pounds over the course of the summer in order to ensure that he could perform his role well, he said.

“It definitely helped,” Acquard said. “I don’t think I could do the physicality stuff that we were doing, like hanging off of structures, just four months ago.”

Unlike Fruit, who found that Puck’s character was similar to his own personality, Acquard felt that adjusting to Oberon’s personality was the most challenging thing for him when preparing for his role as the fairy king.

Towson’s last Mainstage production of a Shakespearian play in October 2013 was “Twelfth Night” and was also directed by Wray, who chose to set the classic story within the time frame of the 1960s. However, this year he decided not to modernize “A Midsummer Night’s Dream.”

“At one time I thought perhaps one way to help a contemporary audience was to put it in Comic Con or Cosplay,” Wray said. “But I thought that was getting in the way of Shakespeare’s intent which was to give an opportunity for people to experience a night out of fun and frolic and sensuality and sexuality.”

The play’s accessibility proved to be useful for Wray in making sure that a contemporary audience knew what was going on.

“I was interested in doing the play because in a contemporary audience right now, we are so focused on technology that sometimes I think we have lost sense or sight of magic and mystery,” Wray said. “This play is appealing to me in the way that it can give us a break from our cell-phones and other technologies, an d sit back and watch a sense of fantasy again and mystery in the world.”

Members of the cast  feel that the message of the play can extend even further.

“Things are going on in society that is very rough and we need to laugh once and a while,” Acquard said. “I think this is the perfect play because it involves nature and it involves these people really letting go and finding things about themselves…I think that it’s a lesson that society kind of needs at this point.”

One thought on “Pucking Around: Whimsical play enchants CFA”