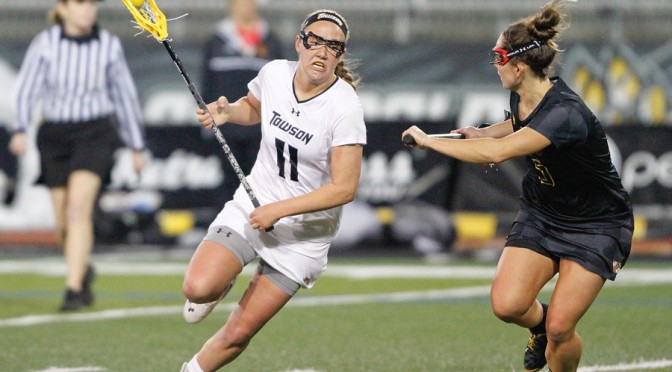 Towson fell to .500 on the season with a 12-5 loss to the No. 14 Penn Quakers on Saturday afternoon in Philadelphia, Pennsylvania.

The Quakers began the game on a 4-1 run and took a 9-2 halftime lead. The Tigers rallied back to cut the deficit to 10-5 with less than five minutes to play, but they couldn’t get any closer.

“We responded defensively in the second half, but we failed to operate at a fast enough speed offensively,” Head Coach Sonia LaMonica said. “Only having 10 shots in a game isn’t going to help us. We’ve got to generate more shots and we can generate shots by going full speed. … That was the glaring stat for today.”

Less than two minutes later, senior attacker Andi Raymond tied the game with her 11th goal of the season. However, the Tigers couldn’t put together a run and take the lead.

Instead, it was Penn that retook the lead just 18 seconds after Raymond’s goal and went on a 3-0 run. Attacker Iris Williamson scored two straight goals in a two-minute span to move the lead to 3-1 with 23:34 left in the first half.

Midfeilder Lely DeSimone added to the lead with 19:34 off an assist from Nina Corcoran to move the lead to 4-1.

“We certainly knew coming into this game that we were going to have to work hard to get more scoring opportunities,” LaMonica said. “We just didn’t work hard enough. They certainly have a great defense and we should have challenged them harder.”

Penn continued to hold control of the game, though, putting together another run to take a big lead into halftime.

Dickinson got the run started with her second goal, off an assist from Williamson. DeSimone followed up three minutes later with her second tally to make it 6-2 with 10 minutes left in the half.

Williamson made it a first-half hat trick with 8:16 left in the half, beating Donnelly on a free position attempt. Less than two minutes later, she got the assists on Corcoran’s second goal to make it 8-2.

“How we start the game on the draws I think is important,” LaMonica said. “We struggled in the first half on the draws and that didn’t help us defensively and then into our offense. I think having more success on the draw alleviates the pressure on both ends of the field. … We have to play to as clean a game as possible, especially against ranked opponents.”

The teams went back and forth through the first eight minutes of the second half, but neither team could score. Freshman midfielder Emily Gillingham helped Towson cut the lead to 9-3 with 21:59 left in the game with a free position goal.

After a Penn goal from attacker Tory Benson, Towson answered back with two more goals to cut the deficit to 10-5. Sophomore midfielder Michelle Gildea and Raymond helped to make it a five-goal game with 4:43 left in the game.

The Quakers took control again, stopping any Tigers comeback. Bensen and DeSimone added goals to give their team the 12-5 win.

Towson will be back home Wednesday, when it faces Baltimore rival Loyola at 7 p.m. at Johnny Unitas Stadium. Towson fell, 7-6, at Loyola last season.