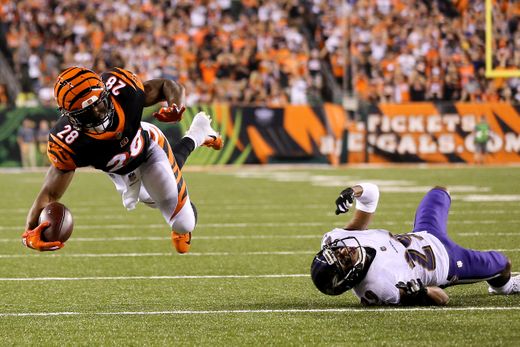 Just over eight months removed from the heartbreaking loss to the Cincinnati Bengals that ended their playoff hopes, the Ravens head into this season with a newly equipped offense. Offseason acquisitions Michael Crabtree, John Brown, and Willie Snead provide a boost to the Ravens wide receiver corps, a glaring weakness from last year. Returning on defense are notables Terrell Suggs, Brandon Carr, and Eric Weddle. After drafting Heisman Trophy winning quarterback Lamar Jackson and the signing of former Rookie of the Year Robert Griffin III, the pressure is on Joe Flacco to return to form in the final year of his contract.

The 2018 campaign kicked off at M&T Bank Stadium against the Buffalo Bills, the team that benefited from Baltimore’s loss at the end of 2017. Despite some early penalties, the Ravens offense came out flying in the first quarter with running back Alex Collins punching in his first touchdown of the season and Flacco would later connect with Brown to give the Ravens an early 14-0 lead. The defense flexed their muscles early and often as Buffalo failed to record a first down until the opening possession of the second half. The Ravens turned this game into a rout as Flacco threw 3 touchdowns while the defense recorded 6 sacks and forced 2 turnovers, defeating the Bills 47-3.

Following a picture-perfect week one, the Ravens had a short week before playing Thursday night at Paul Brown Stadium in Cincinnati. Looking to avenge last year’s loss, the Ravens aimed to provide the same pressure on Bengals quarterback Andy Dalton that stole the show the week before. Early on, it was clear that this game would have a different result as the Bengals were able to march down the field effortlessly, scoring touchdowns on 4 of their first 5 possessions. The Ravens would close the first half on a high note, putting together an 81-yard drive in less than a minute, finishing with a Flacco touchdown pass to Mark Andrews.

Trailing 28-14 to start the second half, the Ravens defense kept Cincinatti in check and trimmed to deficit to 5 points after Justin Tucker hit a 55-yard field goal and Flacco found Brown for a touchdown. Following a Cincinnati field goal by Randy Bullock, the Ravens had a chance to tie the game, but Flacco was strip sacked with less than three minutes to play. That would prove to be the finishing blow as the Ravens fell 34-23. Because of the quick start by Cincinnati, the Ravens were forced to abandon the running game as Flacco had 21 more pass attempts than in week one.

Although the first two games had different outcomes, the Ravens passing game has showed improvements from last season. Head coach John Harbaugh has possibly the most talent on the offensive side since the Super Bowl champion in 2012. The next two weeks will show what this team is made of as they host the Denver Broncos followed by a trip to arch-rival Pittsburgh.