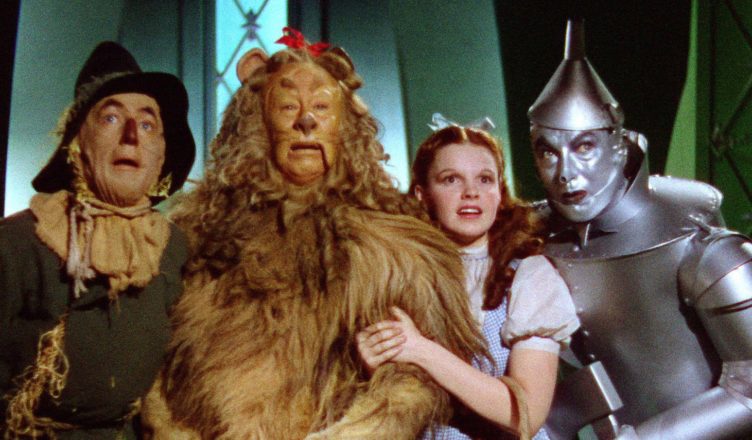 No children’s film has been better accepted or ingrained into the American conscience than “The Wizard of Oz.”   Growing up, each viewing brought with it the same whimsical experience that watching it now feels like a “greatest hits” compilation of some of my earliest and most cherished childhood emotions.  Be it my awe at the sheer size of its magical setting, my joy in befriending its vulnerable characters, or my terror as Flying Monkeys swarm down on them by the dozens, I remember it all.

It wouldn’t surprise me to learn that most everybody has kept at least a small part of their brain reserved for “The Wizard of Oz;” after all, nearly every generation alive has had the film available to them as kids.  So maybe that’s part of the reason we cannot forget it or remove it from its pedestal as a great and important movie. Its words in both its melodies and dialogues have become a part of the vernacular, and their simply-put lessons (“there’s no place like home”) still ring true.

But no matter how they may have sounded, those lessons were not simple.  L. Frank Baum’s 1900 tale journeyed to the same realms where some of a child’s scariest questions reside.  The film did the same; propelling audiences and young Kansas farmgirl Dorothy (Judy Garland) to an unknown land where the safety and security of home is far away, but also where new friends await, and with them advice and devoted protection.  Those friends being a brainless a Scarecrow (Ray Bolger), a heartless Tin Man (Jack Haley), and a cowardly Lion (Bert Lahr); then there’s Toto too.

At the time of production, Warner Brothers was putting most of its stock in its Oscar juggernaut from the same year, “Gone with the Wind,” and it is with that knowledge, I believe, that the well-versed actors who play Dorothy’s fellow adventurers are able to play them so calmly and relaxed. I don’t think they knew they were making a great movie.

Garland was also a star at the time but had not reached the level she’d know even five years later and for the rest of her life.  Her performance here works in its softness; melodrama would split the fabric of the story, while the simple uncertainty and tremble in Garland’s voice prospers.  She longs, and by the time “Over the Rainbow” ended, you believed her troubles.

However, with those troubles, Dorothy and her friends cross magic with song and venture as they travel along the Yellow Brick Road to find the ominous Wizard of Oz, who, they hope, will absolve them of their misgivings.  Their trip is couriered by classic Hollywood effects, ones where you could tell where the set ended, and the backdrop began.  The effort feels all the more personal this way; modern technology makes you realize just how imaginary the story is. Here, though Oz isn’t exactly plausible, it’s nice to see it grounded.

With that said, it speaks to the wonder of the film that in the 80 years since its release and with all the technology achieved since then, that we still cannot stop talking about it.  Countless adaptations, revivals, and spinoffs have entered the media, but none have been as notable as “The Wizard of Oz.”

The ending has always struck me; and I think it may be another contributor to the reason why we keep returning to it.  What a good feeling it is to know that we can dream, dream total wonders, totally inexplicable things, monkeys and witches, and at the end of it, still come back home.

The Wizard of Oz will return to select theaters on February 5th in celebration of its 80th Anniversary.