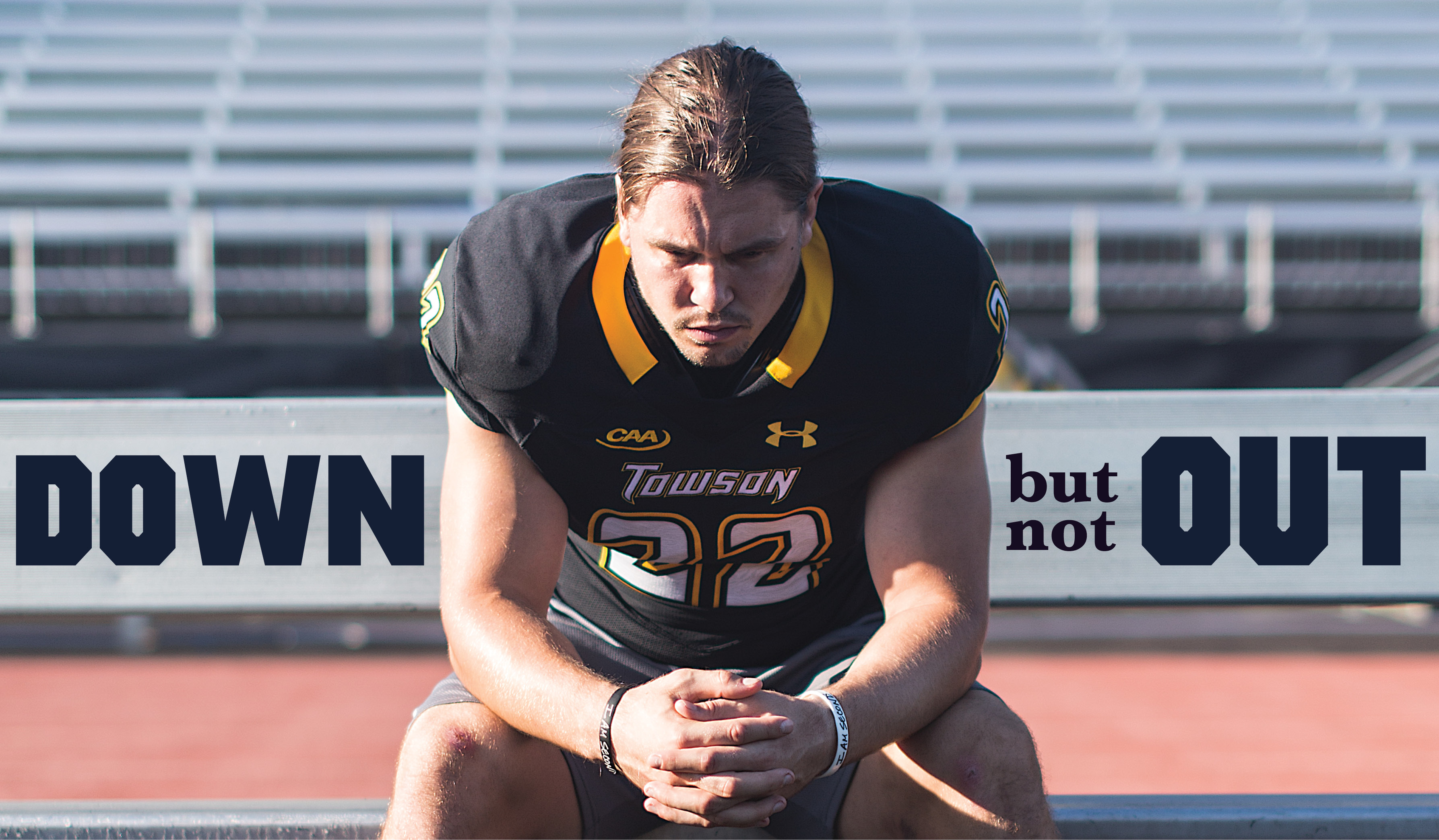 Towson outside linebacker Bryton Barr stalks the Saint Francis offensive line. With the score tied 28-28 late in the fourth quarter, Barr flies around the edge and hits Red Flash quarterback Zack Dreyer in the numbers to force a fumble.

Although Dreyer recovers the ball, Saint Francis is forced to punt from its own end zone, and on the ensuing drive Towson scores the game-winning touchdown to secure its first victory of the 2016 season.

For Barr it has been a long and difficult road to this moment. Since 2013, two pectoral tears and an ACL tear have kept him out of football.

“It was definitely emotional,” Barr said. “It was the first time stepping out on that field since my freshman year. I consider myself the luckiest guy in the world. Not too many people have the opportunity to play college football.”

Barr began his career at Towson as a true freshman. He started in all 11 games and tied for second on the team with 74 tackles. His performance in spring ball even earned him the nickname, “The Animal” from his coaches and teammates.

In 2013, his sophomore year, Barr picked up right where he left off. He started the first two games of the season and registered eight tackles in Towson’s historic 33-18 victory over Connecticut.

However, Barr suffered his first season-ending injury the following week against Holy Cross.

It was a pectoral tear that would keep Barr sidelined for the rest of the year, including the team’s run to the FCS National Championship game.

“When it happened, I didn’t really know what was going on,” Barr said. “It just kind of felt like a stinger so I really didn’t think anything of it. Then I saw the doctor and he said it was torn. I had never had a season-ending injury since I started playing football.”

Although Barr was discouraged, he was thankful that the injury would not end his career. He worked hard in the offseason to get back on the field.

However, another pectoral tear in the spring kept Barr sidelined for his second consecutive season.

2014 was a difficult year for the entire team. Towson was rebuilding after graduating its starting quarterback and the entire offensive line from the previous year.

The Tigers finished 4-8, with Barr watching from the sidelines.

“It was hard,” Barr said. “I consider myself one of the leaders on this team, and I am leader that leads by example. But I just had to keep encouraging my teammates to play to the best of their ability and to give it all they got.”

Barr was itching to put on the pads for the 2015 season.

Then, just a week and a half away from the team’s first game against East Carolina, he was running down the practice field and got hit by one of his own teammates. Barr got up and went to take his position on the defensive side of the football, but after playing a few snaps he knew that something didn’t feel right.

It was yet another season ending-injury for Barr. This time he had suffered an ACL tear (a tear in a ligament in the knee) that kept him out for all of 2015.

“I was devastated,” Barr said. “Being out for two years and then finding out I am going to be out for a third straight year.  It was a little discouraging, but I said, ‘I’ve been here twice. Why not do it a third time?’”

Three years later after his initial injury, Barr is finally back to strapping on his helmet. It hasn’t taken long for “The Animal” to get re-established in his natural habitat on the gridiron.

In three games this season, Barr has recorded 15 tackles and one sack. He will finish his academic career this year, but he will have one more year of eligibility to play in 2017.

Although Barr has taken the road less traveled in his college football career, he wouldn’t have wanted it to go any other way.

“If I wasn’t a believer in Christ, if I didn’t go to Him everyday I don’t know how I would have gotten through these injuries,” Barr said. “I really don’t know where I’d be right now and I give it all to Him, I really do. It’s as simple as that. I became a better man and a better person and I thank God everyday for these injuries, as weird as that sounds.”