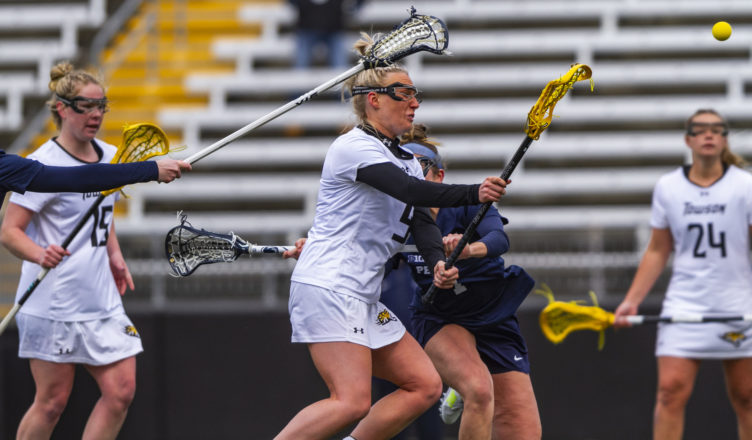 “Tough loss for us,” head coach Sonia LaMonica said. “Think ultimately we need to do a better job of not getting in our own way. Biggest example is unforced errors, clearing game, decision making offensively at key moments of the game. Those are areas we need to simply do a better job.”

“Blair’s a competitor, she brings a mental edge to her game,” LaMonica said. “She’s unintimated which is a real strength. Been a real spark for us getting us off to a great start, playing pivotal role whether offensively on draws she makes things happen.”

Towson fell behind early 3-1 as junior attack Stephanie Kelly scored two goals in the first ten minutes for St. Joseph’s. Following Kelly’s third goal with 16:39 remaining in the first half, the Tigers scored six unanswered including both of Porter’s two goals in the game. Pearre’s goal with three seconds left before halftime gave Towson a 9-5 lead at the half.

“Playing with confidence, making smarter decisions,” LaMonica said. “Playing with much more composure, going into this opponent we knew they’re scrappy, they’re fast, and most importantly they never quit so obviously they fought back.”

In the second half, the Hawks found a rhythm offensively, scoring two goals in less than three minutes of game time. Thornton scored her second goal to give the Tigers an 11-7 lead, but St. Joseph’s went on a 5-0 run in response that lasted 18 minutes.

“We started to play on our heels, second guess our decisions,” LaMonica said. “That proves to be what brought us down. I thought it was more mentally is where we struggled, we need to be more resilient, stand strong and rise to the occasion when teams come back.”

The Hawks, leading 12-11, did not allow Towson to score until Pearre found the net with 3:29 left. Freshman attack Gabby Garrett missed the Tigers next shot that was saved, and after a successful clear attempt by St. Joseph’s the Hawks would score the game winning-goal with under a minute left.

“We could’ve done plenty of things better,” LaMonica said. “We had seen similar looks from St. Joe’s all game and getting the shift and sliding efficiently we didn’t get there in time.”

Garrett missed another shot with 21 seconds left, and a turnover eight seconds later by Porter sealed the St. Joseph’s victory.

Towson attempted 10 free position shots in the first half, but only three after halftime. The Tigers shots on goal also decreased from 14 before halftime to eight in the second half.

Towson will travel to Baltimore to face Loyola on Wednesday, Feb. 19 at 4 p.m.

“Gotta have a short memory which is the beauty of a quick turnaround,” LaMonica said. “Our team can choose to learn and move on quickly or dwell in the past and allow tough losses to define you. I don’t believe it’s something we’ll do, I know they will be ready to learn and get better and Loyola will be a great opportunity to come out and be as motivated as ever.”