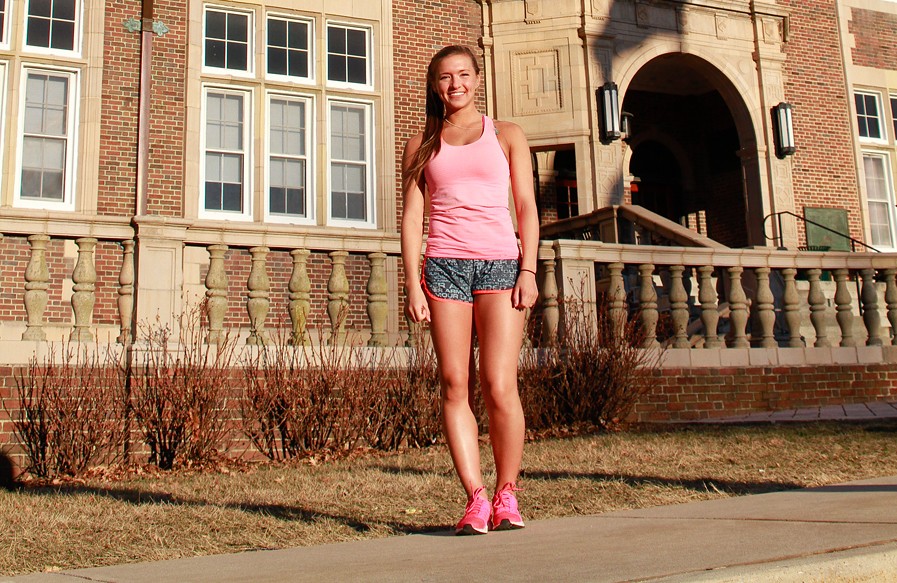 Caitlin Adams, a member of Towson’s cross country team, is preparing to run 305 miles across the state of Maryland. She’s running to raise money for Limbs for Life, an organization that provides prosthetics to those in need.  She is fundraising for the run via her website, www.runacrossmaryland.com. This is the second installment of a series on Caitlin’s preparation for the run, which begins May 23. For the first installment, click here, and find the second part here.

Caitlin Adam’s fundraising efforts were just starting in February, but she was already aiming high. She decided to write to the first lady, Michelle Obama.

A little over a month later, Caitlin got a response. She got an email March 12 letting her know a letter would be coming from Ms. Obama.

Caitlin was on spring break in South Carolina when the letter arrived in the mail at home. Her mother, Gina, couldn’t wait to open, so Caitlin gave her the OK.

When her mother called to tell her what the letter said, Caitlin could sense something was off.

Obama praised Caitlin for what she was doing, but stopped short of offering physical help or money. It wasn’t enough, Caitlin said.

“It wasn’t what I was hoping at all,” she said, sporting a reluctant smile. “I have to be grateful and stay positive. I’m happy that she wrote me back, that’s awesome. Not many people get a letter from Michelle Obama. I don’t mean to sound upset about it, but I think that more can be done so I’m going to fight until more is done.”

To those around Caitlin, her reaction comes as no surprise.

Caitlin’s mom began to notice her daughter’s drive as early as in fifth grade. Caitlin made purses for fun and brought them to school to show her friends.

“She took them to school an everybody wanted one, so she started making purses and selling them,” Gina said. “I thought that was a little out of the norm for a 10-year-old. I think that’s when I first noticed [her drive].”

This determination carried over into middle and high school, where her desire to run faster kept her going.

“I was with her at practice every day and just seeing her push herself all the time, constantly, even when it hurts really bad,” Addie Grayson, her high school teammate, said. “She worked so hard all the time. Everybody has those days where you’re like ‘Oh, not today” but she never did. She always worked for it.”

That hard work led Caitlin to joining Towson’s cross country team in the fall of 2014. However, her times did not improve like she thought they might while competing in the fall season.

It was a difficult few weeks for Caitlin, so she decided to make a change.

She left the cross country team and began planning the run across Maryland. It was another change, but one she felt was necessary.

Her teammates saw her frustration, but some knew she’d still be successful without cross country.

“I knew she was going to do something big when she left the team. It didn’t surprise me much,” junior cross country runner Kelsey Kollar said. “She’s very focused. She’s very determined to do it. … I know she has it.”

“It” could be what drove Caitlin to sell purses in elementary, cut her mile time in half and write to Michelle Obama and still not be satisfied.

“It” could be why she will write the first lady again. She said didn’t want just the letter, she wanted action.