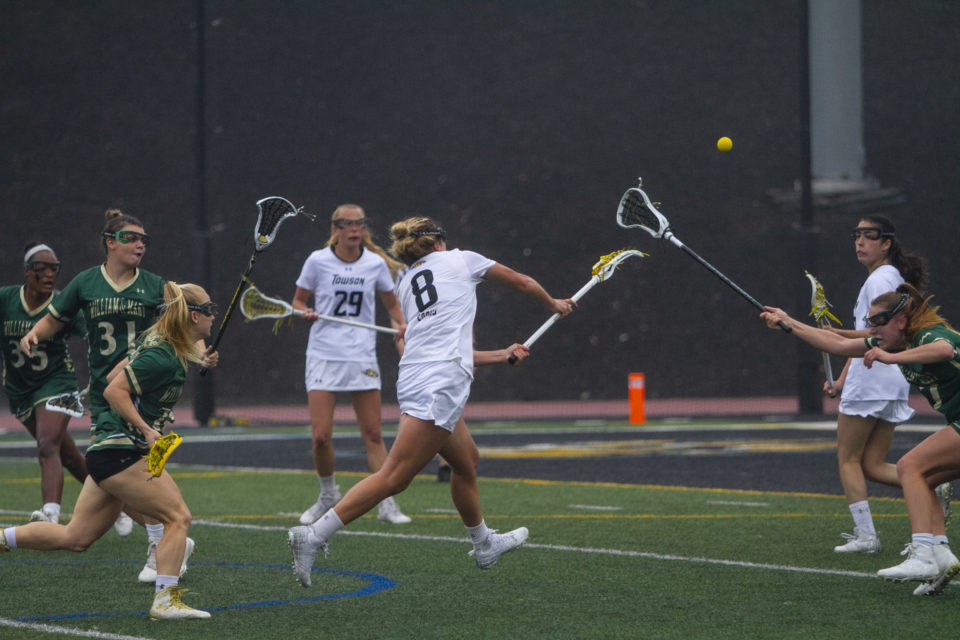 Heading into the CAA tournament, the No. 2 seed Tigers were riding a five-game winning streak and looked to keep the momentum on their side against the No. 3 seed Hofstra Pride. In a back-and-forth contest, Hofstra (12-6, 1-5 CAA) edged out Towson (7-10, 5-1 CAA) 11-8, on Friday night in Harrisonburg, Virginia.

“Despite seeing different defensive looks from Hofstra, including a double face guard on [Sulmonte] and [Kaitlin Thornton], I thought overall the offense worked collectively and generated enough scoring looks,” Head Coach Sonia LaMonica said. “We needed to finish more of those opportunities.”

It is rare for the Tigers to score the first goal in the game, but they did in this contest, 1:50 in by freshman midfielder Kerri Liucci.

Towson’s defense has had stretches this season where they let teams go on runs and Hofstra went on a 3-0 run to end the half..

“There was a momentum swing going into the half, but I felt our squad battled hard in the second to try and regain the edge,” LaMonica said.

With the Tigers trailing 6-4 heading into the second half, sophomore attacker Kaitlin Thornton scored just 48 seconds in.

Their biggest deficit in the game was 9-6, when Kaitlin Thornton scored her third goal of the game, and her 31st goal of the season, with 9:08 remaining in regulation to make it 9-8, but that is as close as Towson would get.

“Kaitlin definitely had some strong plays to keep us in the hunt, something we’ve come to expect from her,” LaMonica said.

Despite outshooting Hofstra 37-21, the Tigers struggled to capitalize on their offensive opportunities.

“Hofstra’s goalie had a great game, but I recall times where we lacked focus to finish,” LaMonica said. “Better finishing would have likely put us in position to pull out a great win.”

The Pride scored two more goals to put the game and season out of reach. Inconsistent play on the defensive side of the ball has been one of the main stories for this team this season.

“Our defensive riding is where we lacked some discipline, which translates into four man-up goals for Hofstra,” LaMonica said.

After starting the season with six straight losses, Towson’s strong effort in conference play gives LaMonica confidence in their talent heading into next season.

“I loved the growth in skills and confidence this team displayed over the course of the season, both collectively and individually,” LaMonica said. “Some outstanding development from a handful of players which we look forward to building on.

With just five seniors on this year’s roster, the expectations for next season will only grow for the Tigers.