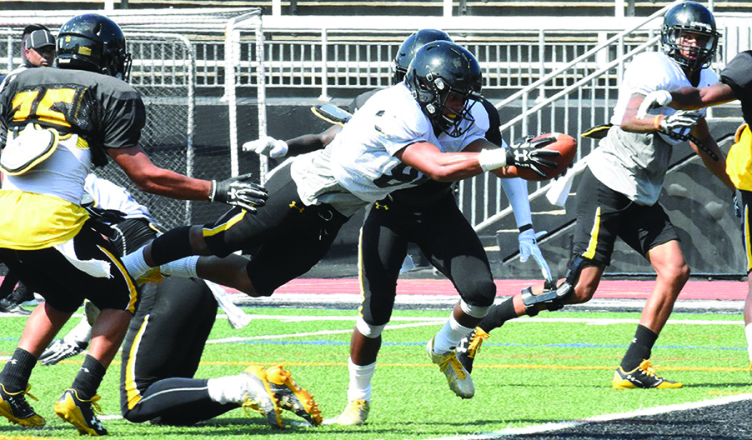 The Tigers held their second scrimmage of the preseason Saturday afternoon at Johnny Unitas Stadium.

“They did better in the heat than they did a week ago,” Head Coach Rob Ambrose said in an interview with towsontigers.com.  “We pushed them much harder, probably another 50 plays not counting special teams, and as a group they responded okay.”

Leatherbury started his hot streak by diving into the endzone for a rushing touchdown and finished the scrimmage with a fourth down running score.

The defense showed playmaking abilities during the scrimmage as well, especially in the backfield.

Both players have had solid preseasons and should push for playing time during the regular season.

Sophomore defensive back D’Nard Graham also got in on the action, forcing a fumble near the sideline.

Simpson was the Colonial Athletic Association (CAA) Offensive Rookie of the Year last season and has been handed the torch from former lead running back Darius Victor.

The goal line period provided intense battles in the trenches. The defense forced some field goals, but the offense was able to find the end zone on runs from freshman fullback Nick Vermillion and freshman quarterback Ryan Stover.

Towson will practice again Monday night as they get ready for the Sept. 2 season opener against Morgan State at 6 p.m. at Johnny Unitas Stadium in the Battle for Greater Baltimore.