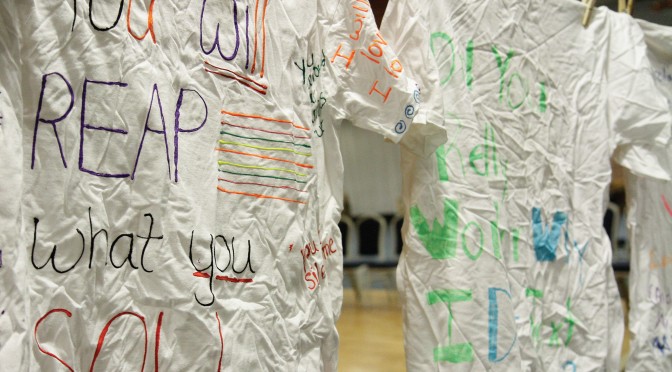 Potomac Lounge was transformed into a safe space for survivors of sexual assault to share their stories, and for friends and allies to come forward and offer their support.

“Take Back the Night presents a space for survivors to do sort of testimonial sharing,” Emily Walsh, a senior speech pathology major, said.

Walsh is in charge of the currently-inactive Feminist Collective’s signature events including “The Vagina Monologues” and Take Back the Night.

The Counseling Center’s Sexual Assault Peer Educators (SAPE) also took part in organizing the event and was available to provide resources to victims of sexual assault, along with TurnAround Inc., a local domestic violence and sexual assault center.

Many women stood at the microphone to share their personal experiences with sexual violence, and received warm clapping and snapping from Take Back the Night attendees. Other students voiced their support and offered to listen to anyone who needed a friend to talk to.

“We want [survivors] to feel that they can talk about things that are often taboo,” Walsh said. “For some, just sharing this information is really cathartic and therapeutic, and it helps them feel like it’s not just their own burden to bear.”

Current statistics show that one in four women will be a victim of sexual assault during their time on a college campus.

Many survivors at the event spoke about being victim of the “red zone”—the first few weeks of college where freshmen women are extremely susceptible to rape and sexual assault.

“Pretty much every woman I know has been involved in some kind of gender violence event, whether that be sexual assault, or battery, or domestic violence,” a student at the event who wished to remain anonymous said.

Many Take Back the Night speakers mentioned that if attendees learned anything from the event, it should be to believe women when they talk about being sexually assaulted.

The event also encouraged supporters to offer to listen to anyone who opens up about their experience with sexual assault—advice that was not heeded by a large group of males who stood up and left the event after only one woman had gotten the chance to tell her story.

“I think that’s really important just to be in the moment with [survivors],” another student who wished to remain anonymous said. “[Those men] weren’t engaged in the moment, which was part of the problem.”

However, it’s important that all students be aware of an act of violence that occurs on college campuses more frequently than any other.

“This happens to everyone, regardless of whether you’re in Greek life, or whatever race you are, whatever gender identity you prefer,” one student attendee said. “I think it’s really important that people be here and consistently remind themselves of what’s happening around them…How students can help other students, rather than turning everyone down and not believing them.”