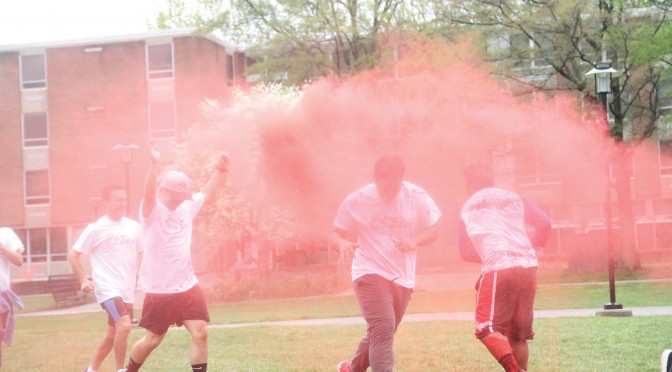 “Last year it snowed, and we had about 150 people show up,” SASA member Chanda Kumar said. “As long as we have any sort of turnout, we’re happy.”

Holi, otherwise known as the festival of colors or the festival of sharing love, is a yearly celebration in India that welcomes the arrival of spring. The festival has Hindu origins, but the event invited students of all religions to come out and partake in the color run.

“Everyone basically starts in a line and we’re just going to send them out and there’s a route,” sophomore business major Suki Sandhu said. “At different stations, we have people throwing color. They’re going to come back and it’s going to be a big color toss-up.”

For URG, it’s important that students get a taste of the different cultures that coexist at Towson.

“My position is to help bring awareness to different student groups and cultural organizations that people may not be aware of,” member of URG Kevin Reynolds said. “There are a lot of cultures and ethnicities at Towson that people aren’t directly aware of, and they bring so much to [the school]…it helps improve the resident experience and just diversify everyone.”

Students ran all over campus from Newell Field to Burdick Hall and all the way to Towson Run until they finished in front of Stephen’s Hall. In Holi tradition, event coordinators threw colored powder on the students as they ran by until everyone’s white Holi T-shirts were decorated in pinks, reds, blues and yellows.

At the end, runners celebrated by tossing up colored powder on the lawn in front of Stephens Hall. The picturesque nature of the event inspired many students to take part.

“[My friend] went last year and I saw pictures, so I was like, ‘oh, I gotta go!’” sophomore Kennedi Thomas said.

By the time the run was over, the clouds had disappeared from the sky and the sun was shining bright over campus.

“[Holi celebrates] the spring colors and flowers to welcome in the new season,” Kumar said. “So it’s a really important event for us. It’s really fun and everyone goes crazy back in India, so we just wanted to bring that here and represent our culture.”