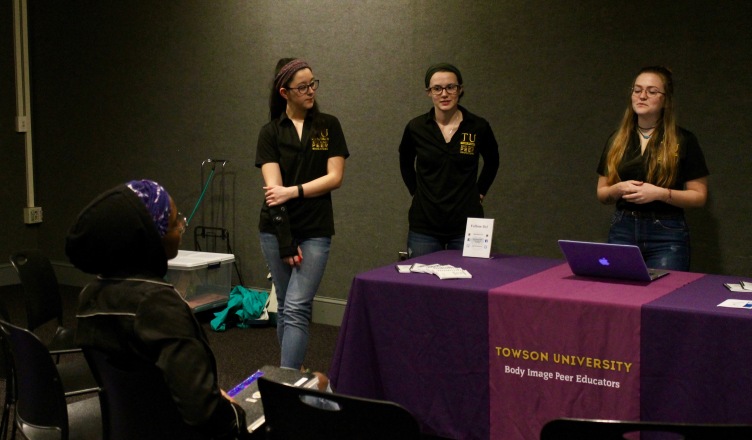 Towson University’s Body Image Peer Educators (BIPE) hosted this year’s Love Your Body Week with a series of body-positive events on campus throughout the week of Oct. 28.

Students were invited to play trivia in West Village Commons, join a yoga session at Burdick Hall, smash scales on the CLA lawn, and enter the chance to win a raffle for a free 60-minute massage.

“The biggest takeaway we hope students get is that every body is beautiful and body diversity is important,” said Megan Lynch, a post-doctoral fellow at TU’s Counseling Center and coordinator of BIPE.

Lynch said that many of this year’s events were inspired by topics important to BIPE members like graduate student Claire Cusack, a first-year student in Towson University’s clinical psychology program. Her research centers on body image issues and eating disorders in gender and sexual minority individuals.

The graduate assistant with BIPE described Love Your Body Week as a  “widespread commitment to loving one’s body,” adding that this year’s events took a more inclusive approach to body image issues.

“This year we tried to be intentional and true to our mission of promoting body positivity more broadly rather than centering eating disorder awareness,” said Cusack, although she cited eating disorders as a central component to body image issues.

According to BIPE’s website, nearly 20 percent of college students are impacted by eating disorders, however, a greater percentage of students struggle to simply feel good about their bodies.

“You don’t need to meet criteria for an eating disorder to struggle with body image issues,” Cusack said.

She added that scales can be triggering for many people. Cusack and Lynch both felt that BIPE’s Smash The Scale event was the week’s most popular.

“By smashing the scales, we are trying to represent that your weight is not your worth,” Lynch said, adding that scales can hold “immense emotional power for many individuals.”

Cusack called the event empowering because “it feels good to take a hammer to something and say ‘this machine does not define me [or] have the power to make me feel less than, etc.’”

Cusack said she hoped Smash the Scale made the topics of food and weight less scary for students, adding that misinformation is often spread about weight gain during the first year of  college.

According to TU senior Madee Henderson, a lead for the BIPE group at the counseling center, smashing the scales can be therapeutic for students as it “represents smashing the stigma around weighing ourselves.”

“We also have scales people can step on with positive affirmations instead of numbers,” Henderson said. “A lot of students loved those scales and said it made their day! We often have students tell us our events made them reconsider how they view scales [and] their own bodies.”

“For the record, let me just say diets don’t work,” Cusack said. “Positive body image is mental emotional work, not something that a gym or a diet solves.”

According to TU sophomore and EMF major Lexi Eure, promoting body positivity on TU’s campus can “help people feel more confident in themselves.”

“I try and love my body by trying to stay healthy and knowing that it’s okay if I don’t eat the best or workout when I wanted to,” Eure said. “People still love me for me.”

“I like my legs because they carry me places,” she said as an example. “I like my hands because I type amazing papers. I like my hips because dancing is fun.”

“Regardless of physical capacity, we are all capable of finding something our body does for us that makes us feel good, and I think it’s important to highlight those moments because it’s so easy to focus on the negative,” Cusack said.

Among other tips for body positivity, Lynch suggested that students decrease exposure to media focused on limited examples of beauty.

“[You should] work to have more flexible and relaxed approach to eating, and remind yourself all the positive qualities you possess rather than focusing on negative things you dislike,” Lynch said.

According to Henderson, body positivity is a process in which it all begins with body neutrality.

“Accepting the body you are in and appreciating it for what it can do is incredibly important on the body positivity journey,” she said. “Body neutrality is the idea that we can simply be ‘okay’ with our bodies, not necessarily love every bit of it. We can thank our bodies for their function and become neutral towards our bodies.”

Cusack said she hoped students would leave the events of Love Your Body Week feeling more connected to their bodies.

“I heard someone once say ‘you don’t have to love your body to be kind to it,’ and I think that’s a message to take home,” Cusack said.

“Your body is worth loving and there are things you can do to honor it,” she added.

Previous post Tampa Bay Lightning off to a slow start 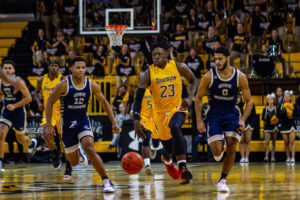