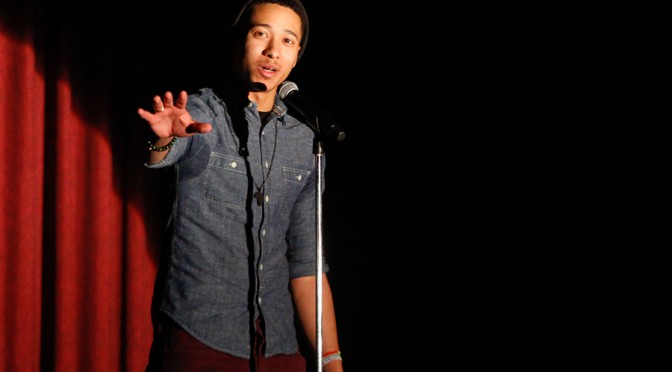 In order to educate the community on issues of social injustice like oppression and prejudice, the Council of Diverse Student Organizations (CDSO) created the event “What’s Your Ferguson” to give students the opportunity to express their experiences and emotions through their art.

“Art is a universal language that we all understand. Discussing issues of oppression and discrimination is not a light thing and we wanted to find a way to package it so that students who aren’t as passionate about social justice can finally be exposed to it,” Council of Diverse Student Organizations Co-Chair Bilphena Yahwon said.

On Tuesday, Nov. 19, students filled into a room in the University Union to witness a showcase of students performing monologues, songs, dances and speaking out against their own personal oppression.

The showcase opened with a video from Ferguson, Missouri showing some of the disruption that has taken place following the death of Michael Brown. The short clip showed riots in the streets and tear gas being sprayed on men, women and children.

However, the event was not solely inspired by the events at Ferguson. The idea was to showcase all the types of injustices and prejudices that students in and around the Towson community face on a daily basis. The event took place before the decision by the grand jury in Ferguson not to indict Darren Wilson, the police officer who shot Brown.

“This event was inspired by the injustices faced by women, faced by members of the LGBTQIA community, faced by Muslims, faced by black boys and black girls, faced by immigrants. The name Ferguson was attached to this event only because we wanted to relate it back to what is currently happening,” Yahwon said.

This video was followed by performances from Towson students, some told their stories though monologues and slam poems, while others sang cultural songs. Between each of the student’s acts, short videos were shown displaying protests in Ferguson and clips of news anchors reporting on the death of unarmed African American men.

Junior Esther Park was just one of many to follow these clips. Park performed a monologue about overcoming society’s idea of beauty and standing up for who she is.

“I know that a lot of times Asians are perceived as people who are really quiet and just don’t really talk and I thought this was a good chance for me to share my story because outside of Towson, or any university, you really wouldn’t have the opportunity so I thought this would be a good chance,” Park said.

The showcase also featured guest speaker Tawanda Jones, whose brother Tyrone West was murdered by Baltimore City police officers in July of 2013. Since then, Jones has been an active member in the Baltimore community.

“We’re very active in the communities. We go to every town hall meeting that we hear about and we protest in various agencies,” Jones said.

Both Jones and the CDSO encourage students to take a stand and speak out against prejudice.

Yahwon also agreed that students should be educated on the events happening in the world. She hopes that students now have a better understanding of what it means to live in a world where people have to deal with this type of injustice.

“I think one of the biggest problems with what’s going on Ferguson is some people feel “well, this didn’t happen to me so it’s not my problem,” Yahwon said. If we’re able to understand the hurt and the pain felt by one another because of our “Fergusons” we will then feel more compelled to speak out against it.”