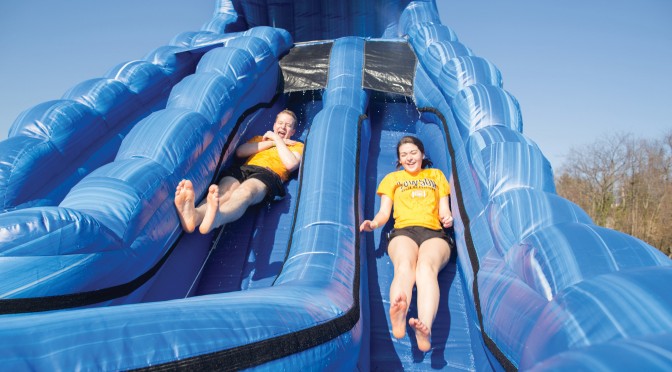 “Special Olympics has been involved with Towson for the last 45 years,” President and CEO of Special Olympics Maryland Jim Schmutz said. “The first ever summer games were held here in 1970, but this is the first time we’ve done a polar bear plunge here on campus. It was natural for us, given the relationship with Towson, for us to have it here.”

All participants appeared dedicated to the event, coming out at 11 a.m. on a Saturday in the chilly temperatures to plunge into the ice-cold water.

However, supporting Special Olympics Maryland wasn’t the only incentive for plungers. Participants also got a free University Plunge shirt and a voucher for free food at the basketball game later that day.

In total, 50 students took the plunge on Saturday.

“It’s kind of just bringing the community together,” Student Government Association Senator Kelly DuPont said. “It doesn’t matter if you’re in Greek Life or involved in sports or anything like that because everyone’s coming out and doing it.”

While some students participated just to support the cause, for others it was a much more personal event.

The event raised $4,500 in total for Special Olympics Maryland and the 7,169 athletes who compete in the state.

“Our athletes participate at no cost, so we have to raise all the money to support the uniforms, equipment, facilities—like when we come to summer games, training, all [those] types of things, so this will go and help support the athletes,” Schmutz said.

The full Polar Bear Plunge for Special Olympics Maryland will be held Jan. 30 at Sandy Point State Park and will celebrate its twentieth anniversary, according to Schmutz. If you missed Saturday’s event, you can donate to support the January Polar Bear Plunge at http://www.somd.org/