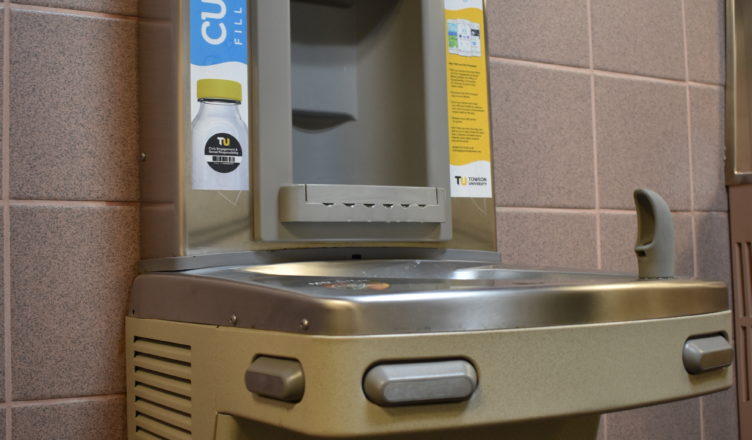 Towson University students have a new way to keep their campus green. TU has begun working with Cupanion, a company that strives to provide clean water to people in need, and the company’s “Fill it Forward” campaign app.

Around campus, signs have been placed on water fountains with spouts to refill reusable water bottles, providing students with the information about the app and how to get involved. According to Luis Sierra, Assistant Director for Civic Engagement, TU started working with Cupanion in August of 2019 to bring this campaign to this campus.

“From the beginning, Cupanion’s ‘Fill it Forward’ initiative seemed like a creative and intentional way to incentivize the use of reusable water bottles and engage the entire campus community around better stewardship of our environment, at the individual, campus, and global scale,” he said. “Through the program, we are able to encourage reduction of single-use plastics.”

According to the company’s website, the “Fill it Forward” campaign was created “to make giving water as easy as drinking water.”

“I think it’s really important because, in the world we’re in today, we’re so aware of how much of a problem it is to waste plastic,” said junior Megan Smith. “I think it’s important to take small steps to use a little plastic as you can.”

Students can purchase Cupanion-specific bottles on their website or affix a Cupanion sticker to their current reusable bottle.

Stickers can be obtained from the Office of Civic Engagement and Social Responsibility, the Office of Sustainability or various events around campus. Students then scan the sticker in the app every time they refill their water bottle.

With every scan of the sticker, Cupanion makes a donation equal to a cup of clean water to their partners WaterAid and The Carbon Farmer. The app tracks how much plastic the user has reduced and how much clean water they are providing others.

“The ‘Fill it Forward’ app also makes it easy for users to see their own environmental impact, and it provides us meaningful metrics at a campus-wide scale,” Sierra said. “For example, since the beginning of the program in August 2019, over 130 pounds of waste has been diverted from our landfills, and over 26 pounds of ocean pollution has been prevented, thanks to those refilling their water bottles and using the ‘Fill it Forward’ app to track their refills.”

By continuously using the app, students can receive rewards as each refill is equal to 10 points. According to Sierra, students can redeem 120 points for a TU Spirit Prize Pack.

“The pack includes items such as TU apparel (jackets, sweaters, shirts), as well as items to make it easier to continue to live sustainably, such as reusable straws, lunch containers, and water bottles,” he said.

This campaign is another step toward the University’s goal of sustainability. TU has previously launched a green building policy, single-stream recycling and an alternative transportation program, among other initiatives.

“It sounds like a cool incentive,” said junior Austin Ngo. “I think that’s a really good program. I feel like a lot of people don’t refill [their water bottles] that much so it’s a really good way to get people to do it.”

Sierra sees other positives to the ‘Fill it Forward’ campaign as well.

“It allows us to highlight the access our campus community has to drinking water through the several hydration stations on campus, while at the same time enabling us to contribute towards funding water access projects around the world,” he said.

Although it has only been at TU for less than a year, Sierra said Fill it Forward’s impact has already been seen.

“According to the data provided to us by Cupanion, over 4,400 cups of clean water have been given through funded water projects so far, through refills tracked at Towson University,” Sierra said.

The Office of Civic Engagement and Social Responsibility will be giving away stickers at the Fix-it Fair on March 10 and the Environmental Conference on April 17. Sierra said students are always welcome to come by the office to grab a sticker at their convenience. Their office is located on the second floor of the Administration Building.

Smith, who didn’t know the program existed, said she would like to see the University do more to promote the program and get more students involved.

“I think it would be cool if they had something set up in the Union, that’s the central spot on campus,” she said. “Advertising on social media and we get the TU announcements everyday and I haven’t seen anything on there about it.”