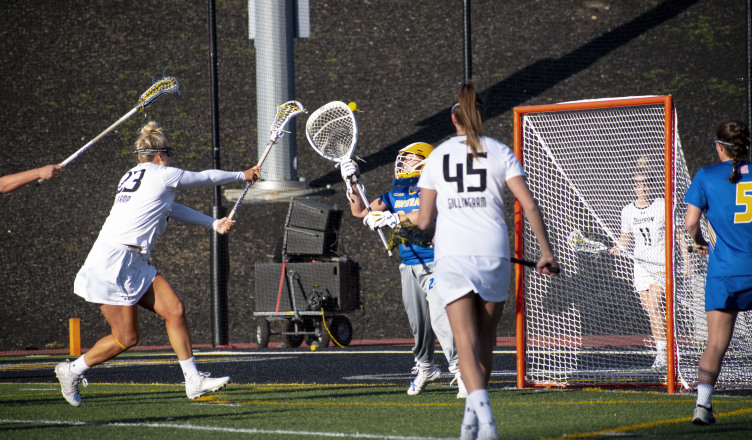 The No. 8 Tigers (13-2, 5-0 CAA) struggled defensively in the first half against the Pride (8-8, 2-4 CAA) but went on a big scoring run sparked by junior attacker Carly Tellekamp midway through the period.

She finished the game with a career-high seven goals on the day, sparking two crucial runs in both halves to halt comeback attempts by the Pride.

“It wasn’t our best day as an offense for shooting percentage, but Carly really showed that finishing ability that she does so well,” Head Coach Sonia LaMonica said. “That was really outstanding on her part.”

Tellekamp scored the first goal of the game just over two minutes into play, but the Pride responded with three consecutive goals to take a 3-1 advantage.

Despite trailing and struggling to keep possession, Towson refused to let Hofstra go ahead.

Tellekamp punched in back-to-back goals, both assisted by senior midfielder Emily Gillingham, to ignite a 7-0 run for Towson. That run was also boosted by the strong play of the defense as the unit caused 14 turnovers in the half.

“They bring a great spark for our offensive play,” LaMonica said. “When they make a great stop or a great play that energy transfers down the field and our offense works hard to continue that momentum. That’s been a driving force for us as this season has unfolded.”

Tellekamp scored four times during that run, and Gillingham put in the final goal of the run to propel the team to an 8-4 lead going into halftime.

The Tigers continued their strong offensive play in the second half, striking early in the period with two quick goals to jump out to a commanding 10-4 advantage.

The Pride answered back with a 4-0 run to cut the deficit to two midway through the half, but Tellekamp responded with an unassisted goal to halt the road team’s momentum and kick off a quick 3-0 run.

Each time Hofstra looked to rally, Towson answered back with an aggressive offensive approach. The Tigers attempted 18 shots in the second half and finished with 37 on the game.

“We like to push and play fun and exciting lacrosse so that’s going to lead to generating plenty of shots,” LaMonica said. “That’s something we wanted to build off of prior years and we want to push that part of our game.”

Senior midfielder Kaitlyn Montalbano and redshirt senior attacker Gabby Cha ripped in goals with under 10 minutes left to play to seal the game. Hofstra made one more rally attempt in the final two minutes, but could not pull off a miracle comeback.

The Tigers look to keep their winning streak alive as they travels to Homewood Field to take on local rival Johns Hopkins Wednesday afternoon. Game time is slated for 4 p.m. Following that contest, the team will close out the season by hosting CAA foe James Madison on senior day Saturday afternoon.

“[Our confidence level] is strong and it needs to be strong,” LaMonica said. “This time of the year we’re coming into what we’ve been working so hard for. We put in work in the beginning of the fall and it’s been a long journey, but things have really come to fruition. It’s great that we’re on a strong upswing.”