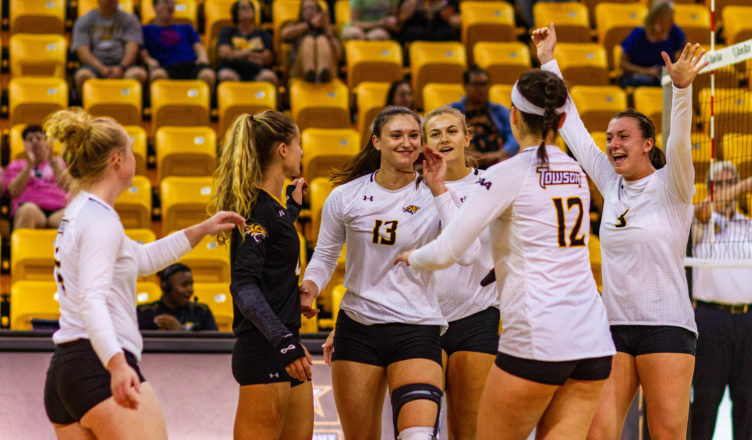 The Tigers have managed to keep their winning streak alive after defeating the Elon Phoenix 3-1 on Sunday Oct. 13.

Towson (16-2, 6-0 CAA) has a five-game lead in the CAA and is the only remaining undefeated team in conference play.

The first set at the Schar Center began with a kill by Towson freshman middle blocker Lydia Wiers.

“What stood out the most to me this weekend was how we responded after losing the first set against Elon,” Senior outside hitter Annie Ertz said. “We totally flipped a switch and came out much more confidently in the second and we carried that energy throughout the rest of the match.”

For the majority of the set, it was back-and-forth until the Tigers had a 7-1 run to take the lead. The Phoenix (9-11, 4-3 CAA) responded with a 6-2 run to tie the set at 20. Towson took advantage of two errors, however, Elon scored the final three points to win the set 25-23. This was the first set the Tigers lost in three games.

Towson struggled with errors, committing 10 in the set compared to six from the Phoenix. Of Elon’s final three points in the set, two came off Tigers errors.

“Although we’ve been taking pretty good care of the ball this year, typically when we do have errors, they tend to come in streaks,” Ertz said. “When this is happening, we come together and remind ourselves to stay calm and keep it simple. That means starting with a good pass and executing the shots in the game plan.”

In the second set, Towson recovered and scored five of the first six points.

The Tigers scored six unanswered points including three off Elon errors. Two of these points came on kills from Wiers with another kill coming from sophomore outside hitter Emily Jarome, leading Towson to win the second set 25-14.

The Tigers started strong in the third set, taking an early 5-0 lead including four straight kills .

The Phoenix tried to comeback at the end, but it was too late as the Tigers won the third set 25-11. Towson only had four errors compared to Elon’s six in the set.

The fourth set was filled with 19 combined errors from both teams and neither team holding more than a five-point lead through the first half of the set. Towson would use a four-point run to pull ahead for good and take the fourth set 25-19, winning the match..

This win was Towson’s tenth consecutive win, keeping them undefeated in conference play.

“[Having a win streak] Definitely adds a little bit of pressure because teams will always play 110% to try and beat the “undefeated team,” said senior middle blocker Silvia Grassini said. “But I like to think that it makes us feel more confident because it shows that when we work our hardest we are capable of great things.”

The Tigers traveled to Williamsburg, Virginia on Friday, Oct. 11 for their conference game against William & Mary. Towson swept the Tribe 3-0.

The Tigers immediately took the lead in the first set after two errors by William & Mary (5-12, 1-5 CAA) and kills by Wiers, Ertz, and Jarome who also recorded an ace. Towson led 7-1 before the Tribe called a timeout.

After this timeout, the Tribe got three points off Tigers errors. William & Mary scored 11 points off Towson errors, but the Tigers scored five of the last seven points to win the set 25-16.

With the second set at an 18-18 tie, Towson scored two straight points, taking a 20-18 lead. This lead was crucial as both teams alternated points before Jarome made a kill to win the set 25-23 for the Tigers.

“We need to work on being more aggressive at the start of matches to help us build bigger leads,” Ertz said. “We also need to work on bringing our A game every single match regardless of what team is on the other side of the net.”

To end the set, the Tigers scored seven of the final eight points to win 25-14 to complete the sweep.

Jarome and Ertz each had double-digit kills. Of the 42 assists Towson had, Wonders collected 38.

“With every win, the target on our back gets bigger, but at the same time, with each team take down, our confidence grows,” Ertz said. “The fact that we are versatile and have so many different weapons allows us to play with more assurance.”

The Tigers returns back to SECU Arena this weekend to face the UNC Wilmington Seahawks on Friday Oct. 18 at 7 p.m. and the Charleston Cougars on Sunday Oct. 20 at 1 p.m.