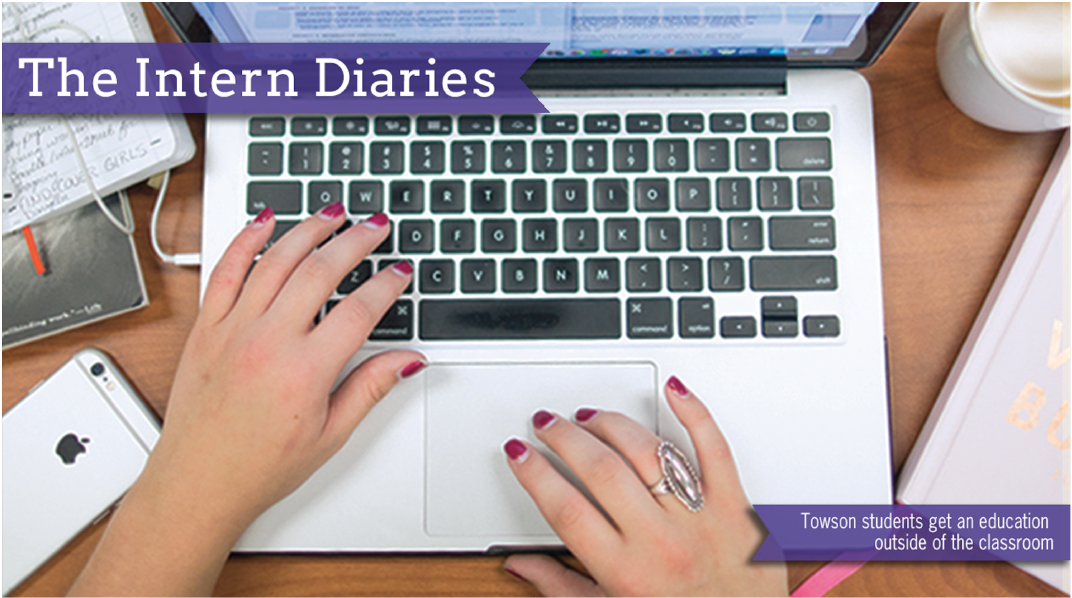 As part of our coverage of the Career Center’s Internship Week, which runs through Oct 9., The Towerlight reached out to several students with unique internships. These are the students who responded.

Junior graphic design major Jacqueline Lavitt took her creative ambition to The Big Apple this past summer for her internship.

“I worked on high fashion advertisements, magazine covers, logos and even helped create websites and applications to be used on all devices,” Lavitt said. “I got the experience to work within the office and go to meetings and photo shoots in New York City.”

Through her success at VMGROUPE, Lavitt got the opportunity to attend the Karigam fashion show during New York Fashion Week.

“My internship was a new and exciting experience,” Lavitt said. “I was able to get the chance to work with people that helped me become a better graphic designer. I was constantly learning new ways to create things on the computer and new strategies to help me in the future.”

Even though Lavitt worked in a traditional office setting, her experience was anything but traditional.

“This office was laid back in the sense that there was a pong table and a TV room for when we needed a break from sitting in front of the computer,” Lavitt said. “It was a great environment to work in mostly because of the people I was surrounded by.”

Lavitt’s experience with VMGROUPE also inspired her to add some flair to the Snapchat of her hometown in Rye Brook, New York.

“I created a Snapchat geofilter to give back to my community,” she said. “I also designed a Nike geotag as well that might be available at the Nike headquarters in Oregon, which I’m excited about.”

Junior Liz Barry spent eight weeks of her summer break in England, but that doesn’t mean she had time for sightseeing.

Instead, Barry, a political science major, was busy interning at Ardens Solicitors, a law firm in London that had her working from 9 a.m. to 4:30 p.m., five days a week. And, she said, she had to budget an extra hour or so for navigating London’s bustling streets and public transportation.

Barry found her place at Ardens Solicitors through the TU Study Abroad resources, which directed her toward the Global Experiences organization, a company that works to connect student applicants with international internship opportunities.

Not having the familial support system of home, Barry said, was one of the most challenging aspects of living and working abroad.

Barry focused on client outreach for the firm. Her responsibilities included writing letters and making calls to clients to schedule appointments. Barry said that before she traveled to London, she was warned that law offices don’t typically allow or accept undergrads for internship programs.

“I think my favorite part was being accepted at a law firm and having to prove myself,” she said.

Barry wants to represent kids who do not get a voice when the adults in their families go through divorces or other legal proceedings.

“If you’re a family lawyer, you usually just work with the parents, but I feel like the children are kind of forgotten about,” she said. “I would love to be a child’s advocate and their lawyer, and make sure they get what’s best for them.”

Unlike Liz Barry, senior Rachel Ungvarsky has never had to travel very far for her internships.

Over the summer, Ungvarsky worked as a marketing and development intern at Abilities Network, a nonprofit in Towson.

This fall, she is interning both at Groove, a digital marketing and advertising agency in Baltimore, and at TU’s own Career Center. She spends about ten hours per week at each.

“It’s a lot,” Ungvarsky said. “I kind of like it, though, because I’m doing things that overlap with both of them. I can take things from one internship and apply them to the other.”

Ungvarsky found the Career Center’s marketing internship through Hire@TU, one of the organization’s online resources. Now, she has her own cubicle in the office.

“My name’s up in front of it and everything,” she said. “I feel like part of the office.”

At times, she thinks her coworkers forget that she’s also a student. She said that sometimes her inbox will be full of work requests that she can’t get to until she’s back in the office.

“I think that’s sometimes a little bit daunting, and it could just be the nature of it,” Ungvarsky said. “It’s their job every day. To them, it never stops, but for me it’s more certain times of the week.”

Her responsibilities there include writing blog posts, advertising events and measuring how students and community respond to that social media use. Ungvarsky has also been working to build a Career Center Rep program to foster relationships between students and the organization.

Ungvarsky is a mass communication major with tracks in advertising and public relations, but she wanted to pursue other internships in order to accumulate diverse experiences that might help her determine a future career path.

“The whole reason I wanted internships is because I know I like what I study, but I don’t know if I like what I’ll do from nine to five everyday,” Ungvarsky said. “I just wanted many different kinds of experiences, different companies, different tasks to figure out what I like.”

Company culture, she said, has become “way more important” to her than she expected.

Tuesday, Sept. 29, marked senior Sam Wilson’s first day as a style intern at Baltimore Magazine. She’ll be there, working about twelve hours per week, until winter break. At time of interview, Wilson was unsure of what her responsibilities at the publication would be.

A graphic design major, Wilson wants to be a beauty editor, but “wasn’t interested in doing journalism for four years in college.”

Graphic design, she said, provides “the best of both worlds.” Her background in art allows her to do things like create layouts, logos and magazine spreads, and her internship experiences have taught her to communicate and have an editor’s voice.

Prior to working at Baltimore Magazine, Wilson was a fashion intern at Girls’ Life magazine, which is also based in Baltimore.

Over the summer, Wilson was a full-time beauty intern at Good Housekeeping, a national publication where her job consisted of organizing the beauty closet, sorting mail and separating any beauty product deliveries. A big part of her job, she said, was collecting press releases for new products that editors might want to use in upcoming issues.

From there, Wilson said, it was her responsibility to correspond with the producers of those products. She would reach out to them to express Good Housekeeping’s interest in featuring their product and ask for more information.

The beauty department at Good Housekeeping was small, she said, so she got to work with everyone very closely.

“I had as much responsibility as they could give me without calling me an assistant,” Wilson said. “So, I had more responsibility than I ever thought. It was great and I got a lot of experience with that.”

But, Wilson’s favorite part of the internship was attending events for new products and seeing the beginnings of new trends before they become popular.

“You get to go and network and meet people from huge brands of makeup that you use every day,” She said. “And you’re like ‘Wow. These people have created this and have done everything from designing the basic product, to package design, to coming up with tutorials on how to use it.’”

Senior marketing major Josh Cullen has found an internship that will save all of his fellow students from struggling to find work after graduation. Cullen is the marketing and social media intern for University Recruiters.

Cullen said that the company works to connect young graduates who haven’t been able to find work with employers who are looking to hire.

“We have a couple finance companies, sales jobs, mortgage companies and all kinds of things,” Cullen said. “We basically source and call these people, and they come in and we give them work.”

Cullen started working for University Recruiters earlier this semester, and although he may be new, he is already heavily integrated with the company. His boss put him in charge of a $20,000 event called “Kick Start Your Career: A Night with Justin Tucker.”

“Basically I have to promote it to Towson students or any student, preferably juniors and seniors, because there are going to be top CEOs from some of the major companies across the country,” Cullen said. “So I have to promote it on all of the social media and really get the word out. I’ve been emailing people constantly.”

The event will be held in the SECU Arena on Nov. 2 at 6:30 pm, and Ravens kicker Justin Tucker will be the keynote speaker.

“He is coming and he is giving a speech on his experience, because he is an NFL kicker, and you can make a living off of that but you also have to have side things,” Cullen said.

“We also have all of these great CEOs that are hiring kids,” Cullen said. “Last year we got 20 hires, which was pretty cool.”