The Fall Performing Arts Showcase was a chance for Towson University performing arts students to come together and demonstrate their talents on Saturday, Nov. 4.

Sophomore psychology major Claire Hoyle could feel the energy and hard work that the groups put into their performances.

“There was a very welcoming atmosphere in the theatre,” Hoyle said. “You could really tell how upbeat everyone was, as well as how hard the groups worked to bring this showcase together.”

The evening consisted of upbeat sets like Purrfect Pitch performing Estelle’s “American Boy” and Tiger Tones performing Adele’s “Water Under the Bridge,” as well as other groups who performed elegant pieces with piano accompaniment.

“The performances were super great,” said freshman theatre design and production major Sammy Socha. “It reminded me of my time when I did choir back in high school.”

Socha said she didn’t have a favorite group but that the performances inspired her to consider getting back into singing.

“They were all so good,” she said. “It makes me want to get involved in singing again, and possibly audition next semester.”

Through the concert, the student groups were able to display their talents and allow the student body to understand what they have all been up to these past couple of months.

“We love to get into the music,” said Original Blend President Lauren Goodwin. “It allows us to really connect with our audience, rather them just sitting and watching us.”

This is Goodwin’s third year in the group, which performs a few times each semester.

Bishop said being part of Original Blend helps him focus on his classes, and that the time he spends working on his talent allows him to relax and gives him a break from his academics.

Bishop has been beatboxing since sixth grade and expressed that he’s always looking to collaborate with fellow beatboxers to improve his talent.

The Towson University College of Fine Arts and Communication has a few more concerts this semester, including a concert for the dance department called “Synergy” on Nov. 15-19, the TU Choirs Fall Concert on Dec. 2, and the TU Symphonic Band Concert on Dec. 3.

Previous post Divisive election for the ages in U.S. 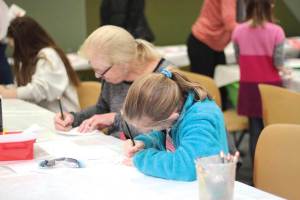