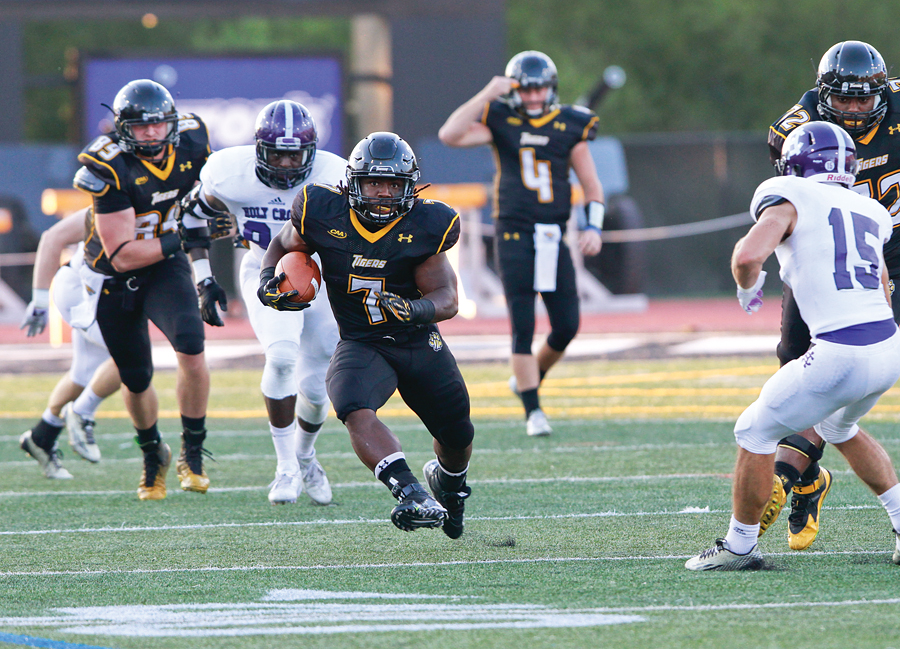 Sometimes things just fall into place at exactly the right time, and that’s something junior running back Darius Victor will never take for granted.

“I was fortunate,” Victor said. “Everything just fell on my side and I thank God every day, I’m just really blessed.”

Victor’s early fortune began when his family was relocated from Liberia to Maryland by the U.S. Refugee Resettlement Program. Victor was 5-years-old at the time his family was moved to Manassas, Virginia.

A few months later, the family moved to Hyattsville, Maryland, where they remained through Victor’s childhood.

“It’s real humbling knowing that I made it out and there’s so many stories about families that haven’t made it out,” Victor said. “I’m just real blessed and fortunate for my family, and I don’t want to ruin it or not make the best of it because I know most people don’t get that from where I come from.”

At a young age, Victor’s family instilled in him the values of humility and taking advantage of the opportunities that are laid out for him.

Victor seldom missed out on his opportunities, including one that he was exceptional at, football.

Victor had parents who worked every day for him and his four siblings, which helped create a tight bond between himself and his older brother, Kevin.

“He started playing football first and I used to go to his practices,” Victor said. “One day, Coach asked if I wanted to play football, I said yes, and I loved it.”

On the field, Kevin was referred to as “Big Vic” and Darius was called “Little Vic.” Victor credited Big Vic as the reason he started playing because of how he wanted to be just like him and how they were always on the football field together.

Victor played the running back position right away, and his first run that he remembers was a 40-yard pitch for a touchdown.

This type of play carried into high school years, where he played football at Northwestern High School. In his senior season, Victor ran for 2,017 yards and 31 touchdowns.

His high school numbers earned him looks from many different colleges but Victor fell in love with Towson University.

“The family environment, atmosphere, community, coaches and players were huge for me,” Victor said. “I grew up in a big family so having a family vibe is the reason that I’m here.”

Victor also joked that his Boys and Girls Club team he played on with his brother was called the Tigers, with black and yellow colors.

“I started out as a Tiger so I may as well finish one,” Victor said. “I just love this place. I love the coaches, players and it was a great decision. I wouldn’t change it for anything in the world.”

Victor played right away for the Tigers as freshman and was the No. 2 running back behind current NFL free agent Terrance West. He finished that season with 629 rushing yards and seven touchdowns. His freshman season was good enough to earn 2013 CAA Offensive Rookie of the Year.

“I got to learn from the best at this level of all-time,” Victor said of playing with West. “He’s a big bro to me and just seeing the way he ran, making the best out of every play, was just great. I don’t think I’d be where I am, as far as I am, if I didn’t come here and sit behind Terrence and learn from him and the coaches.”

Victor became the starting running back after West left for the NFL and finished his sophomore season with 1,305 rushing yards, along with 12 touchdowns.

He was named First-Team All-CAA and became the focal point of Towson’s offense.

His play even encouraged his best friend, Joseph Uwku, to write a song about him. Uwku rapped throughout high school and has even written some small songs about Victor in the past.

Then he came up with Victor’s theme song, “Vito,” which is now played during every home game when Victor makes a big run.

The song is available on iTunes for purchase under “Vi70 (Vito)” by JooZy Joe.

“So one random day, I’m on Instagram and I get a notification and I read that it’s about me,” Victor said. “I didn’t know he was making a song about me and the first time I clicked the link, I couldn’t believe he was talking about me. I put it on the speakers in my house, it’s loud, and I’m yelling, crying and dancing at the same time.”

Victor was happy that the song captured him as a person, as someone who is grateful for the opportunities he received.

As the season comes to a close, Victor hopes that more opportunities open up for Towson football, including playoffs.

“We know that it’s not easy,” Victor said. “Each week, anything can happen. We have to come out humble and not let this win streak get to our head. I think we have good leaders to instill that into the rest of our players and we’re just hungry. We love winning and don’t want to lose another ballgame.”