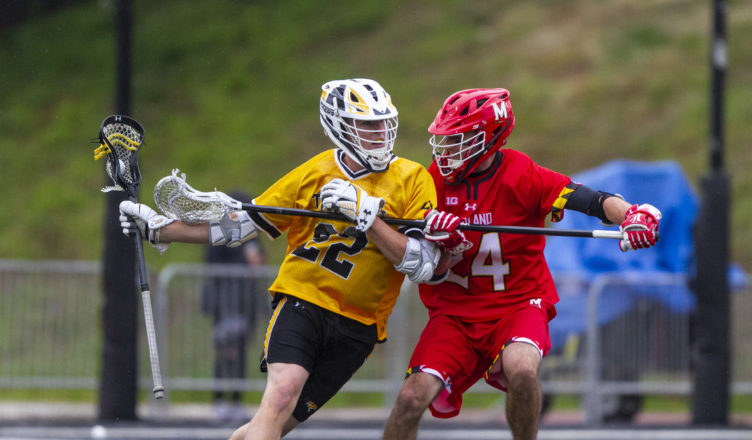 Lacrosse is a game of scoring runs, and two from Mount St. Mary’s proved to be the difference as the Mountaineers (1-1, 0-0 NEC) defeated Towson 11-10.

“Mount St. Mary’s outplayed us today,” said head coach Shawn Nadelen. “They made a few more runs than we did, and were obviously able to earn a one-goal win.”

After senior midfielder Jon Mazza scored the first two goals of the game, the Mount switched up their offensive approach. They spread their attack and middies further away from the crease, experimenting with 1-on-1 situations against Towson’s long stick defense to try generating shots on net.

This strategy paid off, as the Mountaineers scored the next five goals.

Although the Mount scored 24 seconds into the 2nd quarter and extended their lead to 6-3, the Tigers would mount a comeback. Senior attack Brody McLean would score again less than two minutes after, running around the perimeter of the goal from right to left, before cutting to the crease, and releasing a bunch shot to the far post.

Towson lost seven of the eight faceoffs in the first quarter, but improved in the second winning three of five. Senior midfielder Jack McNallen and junior midfielder Joey Chestnutt went a combined 0-7, but freshman midfielder Shane Santora came in and won 10-17 attempts.

“You just gotta keep working and try to find a solution,” Nadalen said. “And I thought, unfortunately, early on we struggled with Jack and Joey, and Shane came in and gave us a spark, and that was good to see.”

Mazza recorded his first hat trick in almost exactly two years, tying the game with 10:30 left. His last hat trick also came against the Mountaineers on Feb. 18, 2018. Sophomore attack James Avanzato’s goal to end the first half capped a 4-0 run by the Tigers that gave them a 7-6 lead at halftime.

In the third quarter, the Mount outscored Towson 5-1 capped by senior midfielder Matt Haggerty’s fourth goal of the game. They held the Tigers scoreless for the final 12 minutes of the quarter.

“It’s stuff that we should’ve worked on, or that we did work on that we didn’t get to bring into this week,” Smith said. “It’s just our own mistakes that we’re making. It’s simple stuff that we can work on.”

Towson held the Mountaineers scoreless in the fourth quarter, but it was too little too late for the Tigers. Redshirt junior attack Luke Fromert slipped his way under and past his defender before cutting to the goal mouth and finishing low under junior goalie Dylan Furnback’s legs.

Less than a minute later, redshirt senior midfielder Grant Maloof scored and Towson was within one with 6:50 left to play. the Tigers missed their final seven shot attempts and the Mountaineers victorious.

Towson will look to pick up their first victory of the season as they host Cornell on Friday, Feb. 21 at 4 p.m. at Johnny Unitas Stadium.