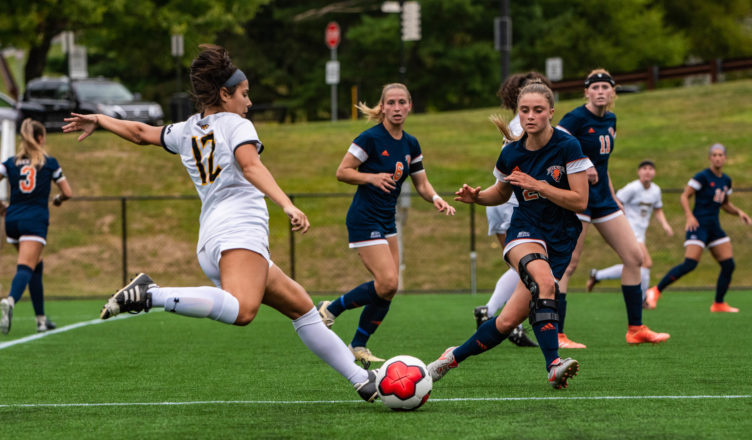 The Tigers fell short this weekend after their Sunday matchup against Bucknell, falling 2-1

“In the second half, we actually got a hold of the ball and pinged it around and had every opportunity to win this game,” said head coach Katherine Vettori. “We are getting more organized and play a nice style of attacking possession.”

In the game’s opening three minutes, Towson’s (2-4-0) defense was strong until small collisions led to the Bison (2-4-0) almost scoring two minutes into the game. Sophomore goalkeeper Delaney Mitchell tripped in the goal box and Bucknell attempted to make a shot while Mitchell was still down. Fortunately, Mitchell was quick enough to grab the ball before it rolled into the open goal.

Shortly after this, in the 13th minute, Mitchell collided a Bison forward and was replaced by freshman Lindsey Pazdziorko.

There were a few shots on goal by the Tigers in the first half, but all were unsuccessful. Notably, sophomore forward Jenna Blank had a clear shot on goal, but the ball went a foot over the crossbar. Towards the end of the first half, freshman defender Lia May had a direct shot at goal, but pressure caused her to shoot too early, which made it easier for freshman goalkeeper Kaylee Donnelly to save the ball for Bucknell.

The Tigers were quick on offense, making complete and neat passes down the field. The Bison’s defense put pressure on the Tigers, causing TU forwards to trip on their own feet when attempting to switch feet.

The second half included many more unsuccessful shots on goal, but the Tigers had possession of the ball for nearly 40 minutes.

Twenty-seven minutes into the second half, senior midfielder Lexi Littlefield scored her first college goal. She was ecstatic about scoring on the Bucknell goalkeeper.

“It was awesome,” Littlefield said. “[Shooting] off a corner is always exciting too because it’s an opportunity you get down near the box.”

Towson kept up their stamina through the entirety of the second half despite the heat and pressure by Bucknell defense.

The second half included many shots on goal, but none went in after Littlefield’s goal. Senior midfielder Nikki Logan shot towards the bottom right corner, but the Bucknell goalie caught the ball inches before it went into the goal.

During the last 15 minutes of the second half, sophomore midfielder Camryn Anderson cleared the ball and the Tigers rushed to keep control of the ball. Towson’s forwards passed the ball until they attempted a shot on goal. It appeared to be a safe shot, but a defender quickly rushed in to steal the ball.

The last seven minutes of the game were tense. The Tigers had the ball for a majority of the second half, but the Bisons were not going to give up.

A lack of communication and organization caused Towson to lose possession of the ball and ultimately get scored on my a Bucknell forward who didn’t appear to be well defended.

“There are little things we need to clean up,” Littlefield said. Little mistakes we make in the game that we have to work out before we get to conference play. Communicating is a big part of what we do. The better we can connect and talk to one another, the better we’ll be.”

Coming off of Monday’s disappointing loss at Penn, Thursday evening’s matchup against cross-cross-town rival UMBC presented Towson with an opportunity to rebound at home before the weekend break.

Given that the season is also still in its early stages, Vettori emitted a rather lighthearted reaction when she was asked what aspects of the team she would like to work on the most.

“Everything,” she said. “We’re just trying to get into a rhythm.”

A close, yet successful, 1-0 result against the visiting Retrievers (1-2-2) certainly helped the Tigers in the right direction.

From the start, Towson, like they have numerous times already this season, was quick to try gaining the upper hand with a swift attacking approach. Logan earned the Tigers a free kick opportunity from just outside the box to the right of the semi circle.

Senior midfielder Justine Stoner took the free kick, but missed high over the left corner of the crossbar inside the match’s first three minutes. On the defensive side, Mitchell made her first career start at goalie for the opening 45 minutes, which included several strong saves just in front of her goal crease which kept the Retrievers goalless.

In the ensuing minutes, Towson had additional chances to tally early from crosses outside the box, but all were headed away. It wouldn’t take long for their persistence to pay off. In the 12th minute, Stoner jumped on a loose ball at the semicircle, firing a low volley towards the right corner.

The outstretched goalkeeper was able to get a piece of it, but not enough to keep it out as Towson took an early 1-0 lead.

Just a few minutes later, the Tigers came within inches of doubling their lead when freshman midfielder Phoebe Canoles directed a pass from the left side of the 18-yard box to senior forward Christiana Davey, who was waiting for the ball from just outside the six-yard box. Davey redirected Canoles’s with her right foot towards goal.

The shot beat the goalie but hit the right post before bouncing out to a UMBC defender.

Junior goalie Hannah Warner came in for the second half and was able to carry out her team’s clean sheet for the remainder of the contest.

“We’re trying right now to figure out really who our number one [goalie] will be going into conference play, and all three healthy goalkeepers have been given that opportunity, and were seeing who can rise,” Vettori said. “I’m actually proud that our goalkeeper crew were a team today and they collectively got that ‘W’.”

UMBC’s two closest misses came in the game’s dying stages when, first, a shot that appeared to be headed for the top left corner of the goal, skidded wide of the post. Additionally, within the last 15 seconds, a crossing header came in from the right wing as a Retriever leaped a Towson defender to get a head on the ball and direct it towards the goal.

The ball would make its way past a diving Warner, but would hit the left goalpost before Towson cleared the ball away as the clock ran out.

“I think you can see there was some flashes of brilliance today with some of our possession and our rhythm,” Vettori said. “I think there’s also some game management that we’re going to strive to get better, and I’m proud of the fight today to close out this game.”

The Tigers’ next game will be at 3 p.m. on Thursday, Sept. 12 at George Washington University.