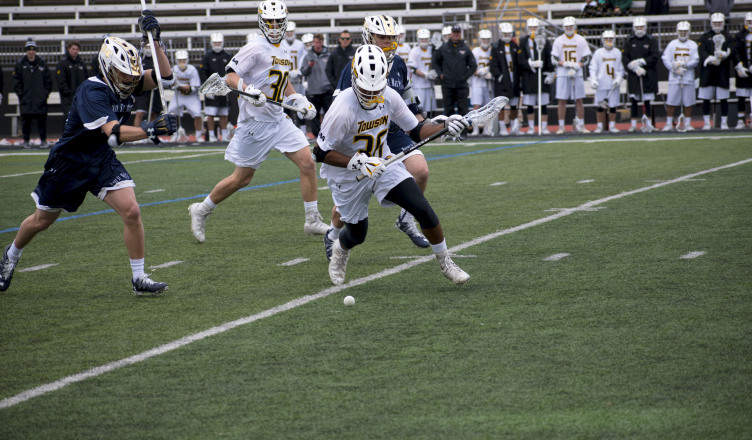 Towson men’s lacrosse had a disappointing showing in its Colonial Athletic Association (CAA) opener as the team fell to Hofstra 9-3 at Shuart Stadium last Saturday afternoon.

Hofstra got on the scoreboard first as senior midfielder Dylan Alderman ripped in a goal seven minutes into the first quarter. Sophomore attacker Ryan Tierney followed up with a goal of his own a few minutes later to give Hofstra a 2-0 advantage going into the second quarter.

Towson got on the board early in the second as junior midfielders Grant Maloof and Timmy Mohanan connected on a man-up opportunity.

Mohanan fed Maloof on the play for Towson’s lone first half score.

Though neither team scored for the rest of the half, Hofstra kept pressure on Towson with several flurries of shot attempts.

The Pride finished the game with 35 shots, with 17 of them being on goal. The Tigers only mustered 23 shots, with just 10 of those on goal.

“It’s tough [to get into rhythm],” Head Coach Shawn Nadelen said. “It’s definitely tough for our offense granted some of our possessions were short due to our own issues.”

Despite being limited on shots, the road team won the faceoff battle with 11 wins thanks to junior midfielder Alex Woodall.

“He had a pretty good game,” Nadelen said. “He’s the one who got us started in the third quarter.”

Hofstra’s aggressive play paid off early in the third quarter as the team went on a 4-1 run to open the period. Tierney accounted for two of the team’s goals during that stretch.

“It was a tightly contested game at halftime, but [in the second half] we did a poor job of rotating and recognizing when we need to support defensively. We didn’t do a good job of recognizing when a guy had a step or two.”

Junior attacker Brendan Sunday scored on an unassisted goal to close out the quarter for the Tigers. However, they trailed 6-3 going into the final stanza.

Towson won possession to kick off the final quarter of play, but could not find the back of the cage. Hofstra took advantage of the struggling Towson offense by scoring three goals within nearly a three minute span to secure the win.
“We broke down in one-on-one matchups and we weren’t great there,” Nadelen said.

Towson looks to end its three-game losing streak this Saturday when the team hosts Drexel at Johnny Unitas Stadium. The opening draw is set for noon.

“We have to key on our preparation,” Nadelen said. “We have to make sure we’re down into what we can do to be successful as a team and then what Drexel does well so we can counter that. We have to get better at shooting the ball than what we showed last week. We’ve definitely shown the ability to [shoot], but we have to do a better job of sharing the ball and defensively we have to communicate better.”