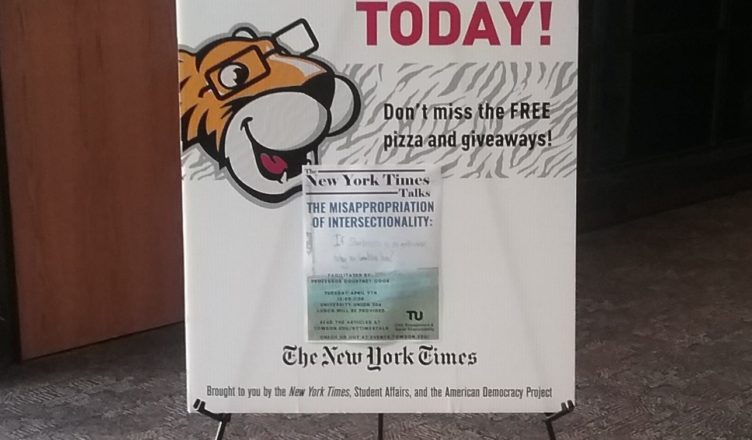 The Office of Civic Engagement and Social Responsibility held their New York Times Talk: The Misappropriation of Intersectionality Tuesday in the University Union to help begin a discussion on the impacts of gentrification and intersectionality.

The conversation was facilitated by women’s and gender studies professor Courtney Cook. Cook started the discussion by showing a video of the Good Morning America news coverage of Rashon Nelson and Donte Robinson, two black men in Philadelphia who were arrested at a Starbucks last year for sitting while preparing for a business meeting without ordering.

While explaining in an interview with the show’s anchor Robin Roberts about what was happening during the incident, Robinson said he “was trying to process the situation to myself at the time because I was thinking about my family…it didn’t really hit me what was going on and that was real.”

Their lawyer, Stewart Cohen, pointed out that, “Starbucks holds itself as a place for people to meet and have public conversations. Those are words from their website.”

Cook noted in the aftermath of the incident that 8,000 Starbucks stores were closed to do “racial-bias training.” However, Cook referenced a New York Times article and summarized that “Starbucks had renewed its image and solidified itself as a helpful factor and home in the community…but Starbucks in hotbed communities can cause community healing and that they show an intersection and combination of racial and class structures.”

Cook said that while the article was well-intended, it doesn’t represent the true meaning of intersectionality coined by scholar Kimberle Crenshaw.

Cook recalled a graffiti that she encountered on West Mulberry Street in Baltimore that read, “If Starbucks is so anti-racist, why no location here?”

“We know that Baltimore is a predominantly Black area,” Cook said. “We also know that it has a lot of social and economic inequities that cause a lot of poverty, so we don’t see a lot of these corporate spaces, like Starbucks, starting businesses here.”

Cook said gentrification is the reason for this. Gentrification is the process of repairing and rebuilding homes and businesses in a deteriorating area accompanied by an influx of middle-class or affluent people. This can result in the displacement of earlier, usually poorer residents. It also leads to rise in property value and rent costs.

The opening of a Starbucks is a leading indicator of gentrification, and is associated with an increase in local housing prices of 0.5%. Starbucks earned $24.7 billion in revenue in 2018.

“This is the company that has the money to give to the communities that it’s in, if it to reappropriate and move around its funds,” Cook said.

Lauren Knights, a freshman, found the talk to be important an important discussion for the TU community.

“In general, this is a topic looking into marginalized populations in big cities who build these communities from the ground up and have big corporations, like Starbucks and Amazon, who target, come in, and raise the property value to push out those people into areas with even lesser opportunities,” Knights said.