Towson earned a 1-0 victory against Loyola University, Maryland, Sunday afternoon at the Tiger Soccer Complex in the Battle of Baltimore.

“Today Loyola battled back and we had to hold on,” Head Coach Greg Paynter said. “I’m proud of the way the girls fought, especially after the way Sebs came off her line a lot and really controlled all of their services. [Loyola] didn’t have any great chances other than from things out distance.”

The Greyhounds (0-2-0) had possession early and put a shot on goal less than one minute into the match. However, senior goalkeeper Taylor Sebolao saved the shot and the Tigers (1-0-1) quickly applied pressure.

Towson junior forwards McKenzie McCaull and Evelyn Neidert connected for the only goal of the game on that counterattack. McCaull crossed the ball to Neidert, who tipped it in at 1:18.

“This week we worked on the early balls behind the defense back because they’re facing their goal,” Neidert said. “It was an easy ball to get in, we were happy to get up ahead and just keep our defense in.”

Towson stayed aggressive later in the half when junior midfielder Sarah Quick put a shot on goal, but the ball was stopped by Loyola’s junior goalkeeper Sumer Rahe.

Tigers’ sophomore forward Elizabeth Coletti put a header on cage in the 38th minute, but Rahe made another save.

The Greyhounds didn’t get another shot in the first half after their early attack and the Tigers went into the locker room with a 1-0 lead.

Loyola came out of the break aggressive and remained that way throughout the final 45 minutes of the game.

The Tigers were held without a shot for the entire second half while the Greyhounds registered three.

Loyola sophomore midfielder Alice Regan had a shot on goal in the 49th minute, but Sebolao made one of her two second-half saves on the play. Sebolao made three saves in her first shutout of the season and 12th of her career.

Despite Loyola’s pressure in the second half, the Towson defense held its ground to earn its first victory of the season.

Towson is on the road for its next three games beginning on Thursday, Aug. 24, with a match against Longwood. The opening draw is scheduled for 7 p.m. at the Lancers’ Athletic Complex. 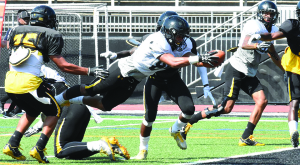 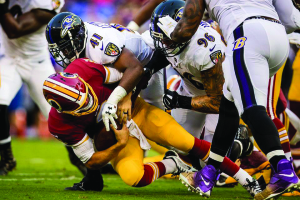