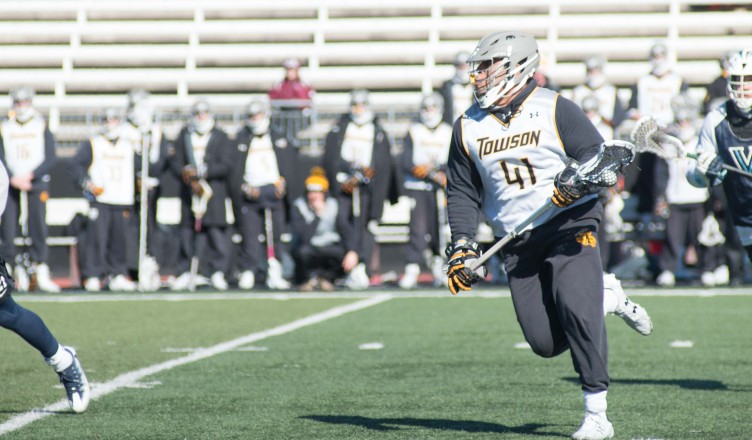 “That made it challenging to rebound against that,” Head Coach Shawn Nadelen said. “You spot a good team a five-goal lead in the first quarter [and] you’ve got a long way to go from there. It didn’t allow us to settle into the game or get in rhythm offensively or defensively. It put us into a hole, something we didn’t do a good job of getting out of.”

Towson got on the scoreboard for the first time this season three minutes into the second quarter when junior midfielder Jon Mazza lost his defender and ripped a shot into the back of the net.

Tigers junior defenseman Chad Patterson scored his first career goal just seven minutes before halftime as he ran down the middle of the field, left unguarded. He found himself one-on-one with the goalie and darted in a score.

The Blue Jays finished the period strong with a 4-0 run and took an 11-2 advantage heading into the break.

Towson limited its mistakes in the second half, but could not overcome the large deficit, as Johns Hopkins held on for the victory.

“It was a string of mistakes in that game,” Nadelen said. “Whether it be lack of focus or lack of skill we just didn’t do a good job of possessing the ball.”

The Tigers look to get their first win of the season in their home opener as the team faces off against Mount St. Mary’s Saturday, Feb. 17, at Johnny Unitas Stadium. Competition is set to begin at noon.

“Hopefully the Towson students and the fans are excited to come out to Unitas and support their Tigers,” Nadelen said. “We always appreciate the people that show up for the games. We expect to put a much better team effort on the field, more disciplined, more fundamental and much more passionate than what we showed last weekend.”