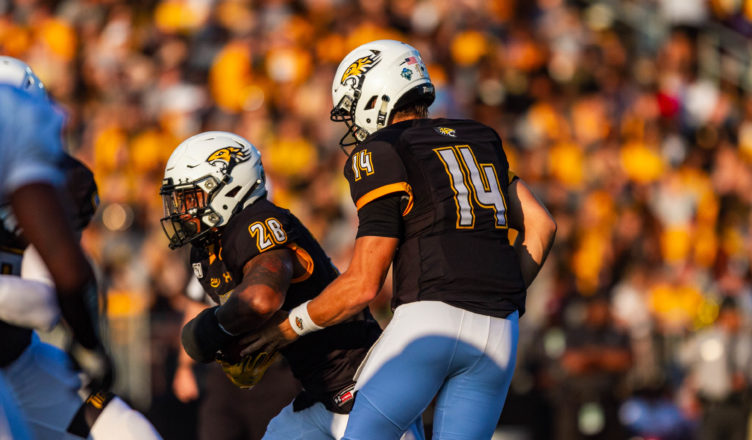 For the first time in the division one era of Towson football, the Tigers (3-0, 1-0 CAA) faced a top ten opponent in Maine during the regular season. Towson scored 28 unanswered points to win 45-23 over the Black Bears (1-2, 0-1 CAA).

“It’s tough to play an opponent of this quality this early,” head coach Rob Ambrose said. “You just try to stack wins and stay healthy in this league. There are too many great coaches and players and too much on the line.”

On the first play of the game, Maine junior quarterback Chris Ferguson found senior wide receiver Earnest Edwards for 54 yards. The Tigers defense recovered and forced a 30-yard field goal attempt which the Black Bears converted. Maine kicked their second field goal later in the quarter to take a 6-0 lead.

Redshirt senior running back Shane Simpson returned the ensuing kickoff 37 yards, but was injured on the play and did not return. Two plays into the drive, redshirt senior quarterback Tom Flacco found redshirt junior wide receiver Caleb Smith for 36 yards for a first down inside the red zone. Four plays later, senior running back Yeedee Thaenrat found the pylon for a touchdown.

“When Shane came out, that’s my brother I knew since high school, but it’s the next man up so we did our job,” Thaenrat said.

In the second quarter, a facemask call on Maine gave the Tigers a first-and-goal, which led to a field goal from senior kicker Aidan O’Neill. On the ensuing drive, Ferguson found sophomore wide receiver Devin Young for 29 yards, setting up a touchdown to Edwards the following play.

Towson responded by advancing inside the Black Bears 30-yard line but O’Neill missed a field goal. Junior defensive back Coby Tippett intercepted his third pass of 2019 to give the Tigers the possession. A pass interference call on Maine set up Thaenrat’s second touchdown in the first half, giving Towson a 17-13 halftime lead.

In the second half, Ferguson completed a 36-yard pass, but the Tigers forced the Black Bears to kick their third field goal of the game.

After Maine punted, Smith caught two straight passes for 24 yards, and Leatherbury caught a 36-yard pass to put Towson inside the 10. Clark caught a Flacco pass and fought his way into the endzone for a touchdown to increase the Tigers lead to 31-16.

Redshirt senior linebacker Keon Paye picked off Ferguson on the third play of the fourth quarter and returned it 73 yards to the Maine one-yard line. On the next play, Thaenrat scored his fourth touchdown, one shy of tying a Towson record.

“I watched the running back and he’s telling the receiver a slant,” Paye said. “I saw the receiver spread out wide and I just jumped it.”

“I can’t remember a time we forced this many turnovers in a game, let alone season,” Ambrose said. “We played great defense against an amazing, dynamic opponent. It’s a good day.”

The Tigers would add to their lead with a 10-yard touchdown run by Kobe Young, to go up 45-16.

Although Maine added a late touchdown, Towson’s defense held the Black Bears to just 10 points in the second half.

Despite being outgained 469-416, the Tigers forced four turnovers, scoring 21 points off of those turnovers, while giving up zero. The Black Bears only rushed for 68 yards, but Ferguson threw for 401 yards.

Flacco threw for 232 yards and one touchdown with zero interceptions. He also led the Tigers in rushing with 68 yards on seven carries. Feliz-Platt had the most carries with 12 for 41 yards. Thaenrat had nine carries for 24 yards along with his four touchdowns.

Clark led the team with 64 receiving yards and caught the only passing touchdown for the Tigers.

On defense, junior safety Steven Brown led Towson with nine tackles, one tackle for loss, one pass breakup and one interception. Redshirt sophomore linebacker Christian Dixon finished with eight tackles, a sack, a tackle for loss, and a forced fumble.

The Tigers return home for Family Weekend against the Villanova Wildcats on Saturday, Sept. 21. Kickoff from Johnny Unitas Stadium is scheduled for 6 p.m.

“We need [the fans],” Ambrose said. “We’re gonna play one of the best teams in the league. We need The U packed, loud, obnoxious. I want the ground to shake, I want the birds to run away because it’s too darn loud. Please, bring it, bring me the students.”