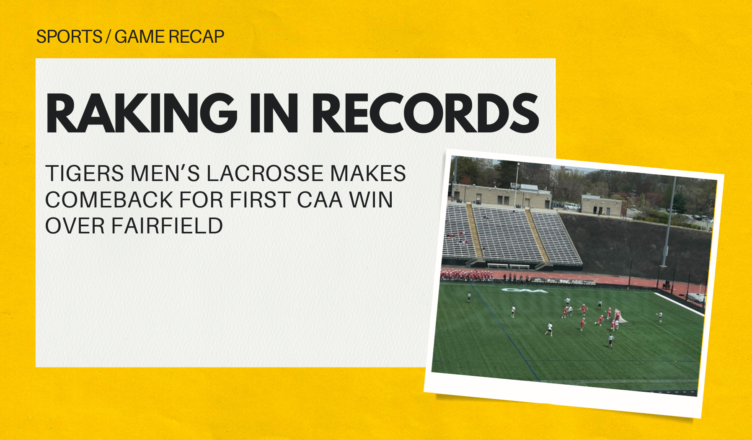 The Towson University (TU) Men’s Lacrosse team overcame a 7-3 deficit at halftime to take down Fairfield University by a score of 12-11 on Saturday, April 10 at Johnny Unitas Stadium in Towson.

The Tigers (4-6), with their first in-conference win, bested the Stags (2-6) in yet another close game for TU. Seven out of the ten games that TU has played this year have been decided by two goals or less.

The Tigers were led by redshirt freshman attackman Andrew Milani and junior midfielder Alex Reid who both had two goals and one assist.

Junior attackman James Avanzato also chipped in three assists. Junior midfielder Drew Martin had a career high six wins at the faceoff x, which helped the Tigers gain possessions in the second half to secure the win.

Milani scored the game winning goal with a behind the back shot assisted by Avanzato with 5:50 left in the fourth quarter. According to Milani, the win was huge for team morale as a good percent of the team had never won a Colonial Athletic Association (CAA) game before.

“Coach asked us the other day, how many kids on our team had a CAA win, and it was about one fifth of the team,” Milani said. “I think that was a huge morale boost for four fifths of the team to get their first CAA win.”

Tigers Head Coach Shawn Nadelen said it was a relief to get their first CAA win over a Stags team that was also searching for their first win in conference.

“We knew it was going to be a scrappy game that came down to the wire,” Nadelen said after the game. “We’re just really proud of our guys to pull together and earn a tough win at home.”

“We started being more competitive at the x, they really dominated at the faceoff in the first half,” Nadelen said. “When you’re playing a lot of defense it’s hard to get into a rhythm offensively.”

Nadelen credited Martin’s ability to come in at the faceoff and win TU possessions through ground balls as a factor in the come-from-behind win. Martin said his position is not typically as a faceoff man but did what he could to help his team win.

“Props to the other faceoff guys who are teaching me different moves throughout practice and helping me out,” Martin said. “I am doing whatever I can to help my team get a dub.”

The Tigers struggled in the first half to get shots off. TU only shot the ball 14 times to Fairfield’s 27. In the second half the Tigers outshot the Stags 35-14. Both teams had 15 turnovers a piece and Fairfield won the groundball battle 37- 30. TU is set to take on  Hofstra University at noon on Tuesday, April 13 at Johnny Unitas Stadium in Towson.