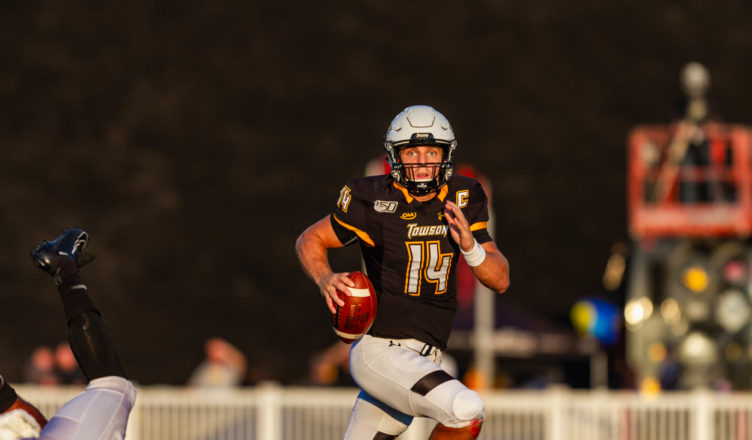 In the first-ever matchup between the Tigers and the Florida Gators (5-0, 2-0 SEC), Florida shut out Towson 38-0. This was the first time the Tigers have been shutout since 2014 vs West Virginia.

“I’m extremely proud of our guys, there’s no quit in them,” Ambrose said.

The Gators quickly moved the ball downfield and in eight plays had a first and goal at the ten. Redshirt junior quarterback Kyle Trask found sophomore tight end Kyle Pitts for a touchdown four plays later. Towson (3-2, 1-1 CAA) made some positive plays on their first drive before a fumble by redshirt senior quarterback Tom Flacco ended it.

“On the first drive that’s on me, I dropped the ball,” Flacco said. “We moved the ball pretty well like we expected.”

On Florida’s ensuing drive senior wide receiver Tyrie Cleveland caught a 32-yard pass to the Towson 29. To end the quarter, a fumble was forced by redshirt sophomore linebacker Christian Dixon but recovered by a Gators lineman.

Three straight completions put the Gators inside Towson territory. Pierce ran left for 31- yards to the 13. A pass interference call on the Tigers set up first and goal. Trask took advantage of it two plays later, rushing for a 1-yard touchdown giving Florida a 17-0 lead.

“We made too many mistakes to be able to win a ballgame against a quality opponent like this,” Ambrose said. “We learned a lot about ourselves and I think it tells us who we can be for the rest of the season.”

The Tigers reached the Florida 45 but Flacco was sacked on third down. After a punt, junior defensive lineman Tibo Debaillie sacked Trask for a loss of three to end the half. At halftime, Trask completed all 13 of his passes. For Towson, 13 of their 19 offensive plays were in Florida territory.

A bad snap to start the second half cost the Tigers 13 yards. Flacco lobbed a ball downfield that was intercepted. Towson’s defense responded with their third sack from redshirt junior linebacker Bryce Carter leading to a punt. A batted pass from Flacco was intercepted and returned to the six.

Two plays later Pitts caught his second touchdown of the game to increase Florida’s lead to 24-0. On the Gators next drive sophomore running back Dameon Pierce ran down the sideline 37-yards for a touchdown.

Flacco found Leatherbury for 25-yards inside Florida territory. Redshirt sophomore wide receiver Darian Street caught a low ball as he was lying down for a first down. On the first play of the fourth quarter, Flacco was sacked losing 16 yards. O’Neill’s second field goal was blocked as the Gators continued to shut out Towson.

Redshirt freshman quarterback Emory Jones came in at quarterback for Florida and hit Cleveland to the Tigers 36. Jones ran for 29-yards setting up another Gators touchdown.

“Thought we had a good plan, thought we played hard and played smart,” Ambrose said. “We got overmatched a couple times here and there and didn’t recover correctly. This is a great measuring stick for our kids, they understand who and what they can be the rest of the year based on playing a great team like Florida.”

Florida outgained Towson 422-248 including 160 rushing yards. The Tigers went 0-4 in the red zone including a fumble and a missed field goal while the Gators went 4-4.

Flacco only threw for 157 yards and two interceptions. Thaenrat rushed for 35 yards on eight carries. Leatherbury led Towson with 65 yards on four receptions.

On defense junior safety S.J. Brown led the Tigers with 11 tackles and a pass deflection. Dixon had nine tackles, a sack, and a forced fumble. Junior defensive back Coby Tippett had eight tackles and two pass breakups.

Despite Gainesville being a five-hour flight from Towson, some Tigers fans made the trip and Ambrose noticed.

Towson has a bye week next Saturday before returning home to Johnny Unitas Stadium for two home games. The Tigers face the Albany Great Danes on Saturday, Oct. 12 at 4 p.m.