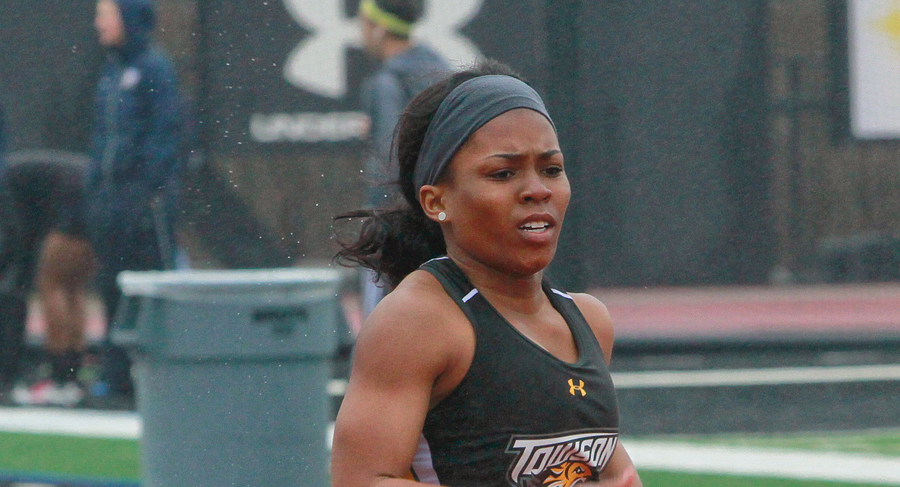 The action began on Saturday, March 7 when junior sprinter and hurdler Kaitlyn Davis finished sixth in her heat and placed 26th out of 28 competitors in the 60-meter hurdle preliminaries with a time of 9.08 seconds.

Sophomore sprinter Zanae Freeland then finished fourth in her heat and placed 17th out of 25 competitors in the 200-meter dash with a time of 24.82.

While Davis and Freeland didn’t qualify in their events earlier in the day, the Tigers still had a chance to qualify with senior captain Emily Wenger and junior pole vaulter Maggie Rampolla competing later in the day.

However, in the pole vault event, Rampolla was one of eight competitors who couldn’t qualify after missing the 11-foot, 7.75-inch height three times and Wenger withdrew from the 500-meter dash due to illness.

Rampolla said that missing the last two weeks of the season because of the snow hurt her performance in the championships.
“Having three weeks off makes competing that much more exciting, but it is a totally different environment,” she said. “I know for me as a pole vaulter, there’s so much more adrenaline so I need to be on a bigger pole which I wasn’t able to transition to during the meet yesterday.”

Wenger said that she was disappointed that she could not participate in her last indoor meet of her career.

“Sometimes things are out of your hands. I was trying to rally enough to run but I didn’t have the energy in me,” she said.
Although Towson didn’t earn any ECAC qualifiers, Wenger said that she is very proud of the team’s efforts this season.

“I am very proud because I see firsthand how hard these girls work every day and how we earned our spot to get here,” she said. “We’re already for the weather to clear up and take our momentum into the outdoor season which starts next weekend.”

Towson will begin its outdoor season on Friday, March 13, in Wilmington, North Carolina at the UNCW Seahawk Invitational.

“I am very excited,” Rampolla said. “I am bummed that we will have a very short week of practice, but like I said I love competing more than practice. I am able to really put together the technique and everything I have worked on in practice together.”

After competing in the UNCW Seahawk Invitational, the Tigers will return home to host the Towson Invitational on Sunday Mar. 29.

“We look forward to our home meets all year long, so we’re very excited” Wenger said. “Most of our meets our relatively far but we have two home meets our friends and families can come to.”