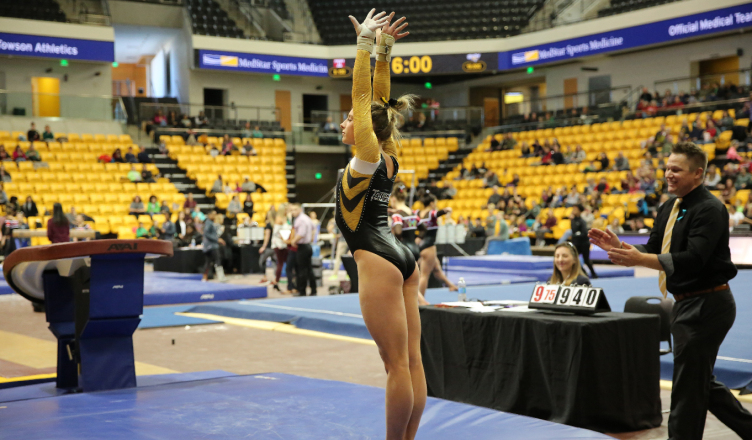 Powered by a season-high score of 48.875 on the bars, Towson finished second at a quad meet this weekend at the Rutgers Athletic Center in Piscataway, New Jersey.

Towson topped fellow meet participants Western Michigan (192.650) and Ursinus (188.125) on the way to its second-place finish.

The meet started on the bars with Towson posting the highest score of the event. Senior Tyra McKellar led the team with a third-place finish and a score of 9.850. Junior Mary Elle Arduino scored a career-high 9.775 points, the same as senior Cortni Baker. Both athletes tied for sixth place, while senior Katie McGrady finished ninth with 9.750 points

“The girls did a really great job of coming out and starting on the first event really strong,” Head Coach Vicki May said. “We were able to add a new routine into our lineup that had some more difficulty so I think that really helped and made it really exciting.”

Arduino, McKellar and senior Lauren Cahalan helped Towson to a second-place finish on the beam. All three athletes had a score of 9.700 and tied for seventh place to help Towson score a 48.400 in the event.

On the floor, Baker scored a 9.825 during the third rotation to tie for third place. Cahalan finished seventh with a 9.750, and senior Gabriella Yarussi scored a 9.700 to place ninth.

“They both have been very consistent for us this year,” May said. “Cortni has added a new vault with some higher difficulty. That was that one event that she wasn’t quite able to put together, [but] she’s done a phenomenal job with it this year.”

In the all-around, Arduino finished second with a 38.550 and just .050 points behind Rutgers’ first-place Belle Huang.

The Tigers get another shot against the Scarlet Knights Friday as they host a tri-meet at SECU Arena against Rutgers and EAGL rival George Washington. The meet is the team’s annual pink meet in show of breast cancer awareness and is scheduled to start at 7 p.m.

“It’s something that as a collegiate sport of gymnastics we have embraced,” May said. “We go to a couple [pink meets] throughout the season so it’ll be nice to have one here at home this year and just be able to raise some awareness.”