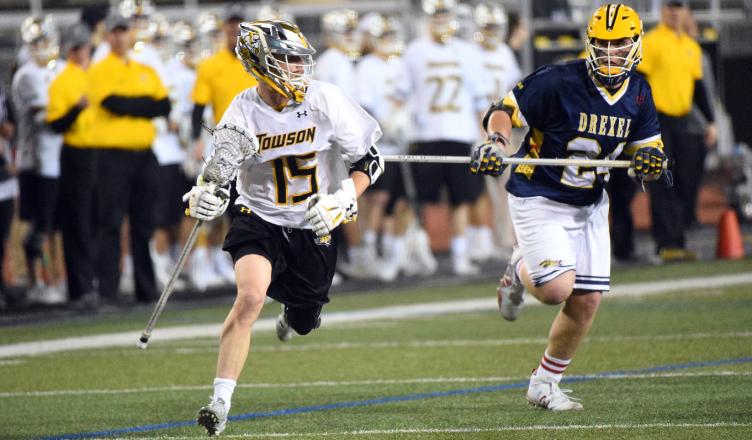 Towson men’s lacrosse suffered a crushing 8-4 loss against the University of Massachusetts Saturday afternoon at Garber Field, as the team struggled defensively in the fourth quarter.

This loss brings the team to 1-5 on the road, and 1-2 in Colonial Athletic Association (CAA) play with just two games left in the season.

Both teams played sloppy in the first quarter as they combined for 13 turnovers in the period. Towson had seven of those turnovers, and UMass had six.

Despite the sloppy play, both teams scored a goal in the stanza.

The Tigers took control of the game in the second quarter, as redshirt freshman attacker Luke Fromert and junior attacker Timmy Monahan each punched in a goal in the period to give the black and gold a 3-1 lead going into the break.

The Minutemen regained momentum coming out of halftime as they scored two goals in the first six minutes of the third quarter to even the score 3-3.

Freshman attacker Chris Connolly ripped in a goal with just under five minutes left in the period to give UMass a 4-3 advantage going into the fourth quarter.

Redshirt senior attacker Jean-Luc Chetner scored early in the final quarter off a feed from Monahan to knot up the score, but the defense struggled to stop the home team throughout the quarter.

The Minutemen scored twice off of back-to-back turnovers with just over three minutes left to play to regain the lead.

The Tigers looked to rally, but they committed another late turnover and gave up two goals to halt their comeback attempt.

Towson looks to bounce back as they return home to take on CAA rival Delaware Saturday at Johnny Unitas Stadium. Game time is set for noon.