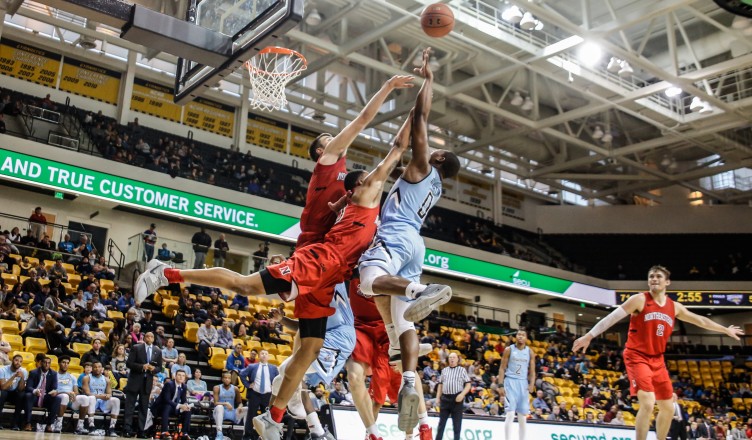 Photo by Joe Noyes/ The Towerlight.

“It was a good turnout, and there was good energy in the building,” Head Coach Pat Skerry said. “Hopefully we’ve raised a lot of awareness, and we appreciate everybody coming out and the support for it.”

“We just didn’t guard,” Skerry said. “We didn’t keep the ball in front. We committed silly fouls, and we didn’t guard threes.”

Redshirt junior guard Vasa Pusica put on a show for the Huskies in the first half, recording 11 points in the period. He connected on two shots from beyond the arc, and drove to the basket well. Pusica recorded a game-high 23 points on an efficient 70 percent field goal percentage, as he capitalized off of Towson’s defensive breakdowns.

The Tigers struggled to make shots early, shooting a horrific 32 percent from the field in the first half, and looked disinterested at times defensively.

Towson came out of the break much more energetic, cutting the deficit to six just five minutes into the period. However, Northeastern regained momentum with an 11-2 run.

With just under eight minutes remaining in the game, the Tigers clawed back within six once again, but the Huskies went on a 10-0 run to seal the victory.

Towson rotated well and played physical defense during their comeback attempts, but it only took a few quick made shots from Northeastern to demoralize the team.

“The energy level a lot of the time is based on our offense and that’s the challenging thing with this group,” Skerry said. “It’s easy to get excited when you’re making shots, but basketball doesn’t work that way.”

Towson only led twice throughout the game, both times occuring within the first two minutes of play. Despite a talented group of seniors in Brian Starr, Eddie Keith and Mike Morsell, the team can’t seem to find stability in its play.

Skerry recognized that some of the weight has to fall on the coaching staff for not consistently getting the best out of players.

The team won 11 of 12 games to start the season, but they’ve been struggling recently. They have the capability to right the ship though. It’s simply a matter of mental preparation and fortitude.

“This group has been very up-and-down,” Skerry said. “We didn’t handle prosperity well and guys didn’t do what is really important, but we’ve got the tools physically to defend.”

Click here to read what the autism awareness game means to Skerry and his family.