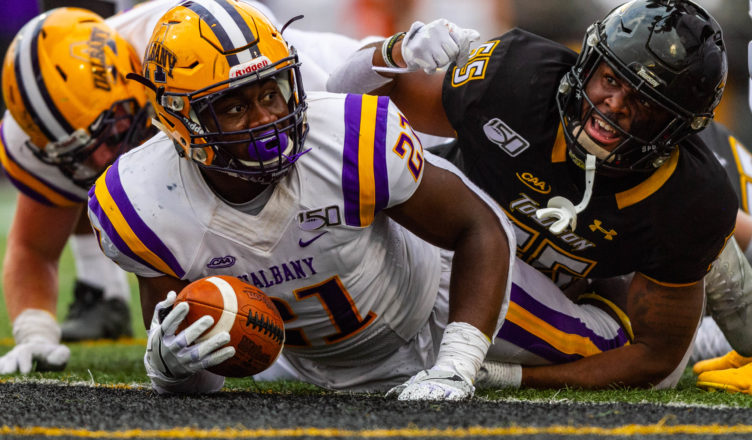 Early on in Towson’s first home game in three weeks, it was clear that Albany came to play, and the No. 9 Tigers (3-3, 1-2 CAA) didn’t. The Great Danes’ opening drive went 87 yards in less than three minutes for a touchdown, leaving Towson to play catch-up all day.

Despite a 17-14 score at halftime, the game was not nearly as competitive as it seemed. The Great Danes outgained Towson 511-280 as they upset the Tigers 38-21.

“Congratulations to Coach Gattuso and his football team,” head coach Rob Ambrose said. “They played harder and made less mistakes than we did. Credit to them, they are very well-coached and a well-motivated team. This parity is what our league is all about and we are going to have to play better moving forward.”

Towson’s offense struggled throughout the game as the Tigers failed to surpass 100 yards rushing for the second straight game. Senior running back Yeedee Thaenrat led Towson with just 36 yards rushing.

“We got beat up front in the run game and we made critical errors in critical moments,” Ambrose said. “You cannot make those types of mistakes in this league. It doesn’t matter who you play, any team can beat any team in this league on any given day and they did and we didn’t.”

While the offense had its problems, the Tiger defense could not slow down the Great Danes. Albany redshirt freshman quarterback Jeff Undercuffler threw for 380 yards and two touchdowns. Ambrose mentioned Towson’s inability to tackle in open space as a main problem.

The Tigers managed to put together scoring opportunities thanks to two first-half fumbles forced by the defense. However, Towson only had one scoring drive that began in their own territory, which is reflective of the offense’s struggles.

“We came to play football, they came to win,” Ambrose said.

While the Tigers only turned the ball over once, redshirt sophomore punter Shane McDonough punted the ball seven times, the most in a game this season.

Trailing by 17, Towson appeared to start a comeback as Flacco found redshirt sophomore wide receiver Darian Street for a highlight-reel touchdown. However, late in the fourth quarter, the Tigers went for it on fourth and goal inside the five. A false start penalty backed them up and led to a failed conversion.

“We shot ourselves in the foot,” Ambrose said. “Instead of having a manageable situation, actually a play that was a touchdown and we all knew it, we took a penalty.”

The loss drops Towson into the bottom-half of the Colonial Athletic Association standings.

“We got beat by kids that were highly motivated to beat us, and we need to get a little internal motivation and start looking at this as opportunities instead of obligations,” Ambrose said.

The Tigers look to end their three-game losing streak vs Bucknell during homecoming weekend on Saturday, Oct. 19. The game is scheduled to kickoff at 4 p.m. at Johnny Unitas Stadium.