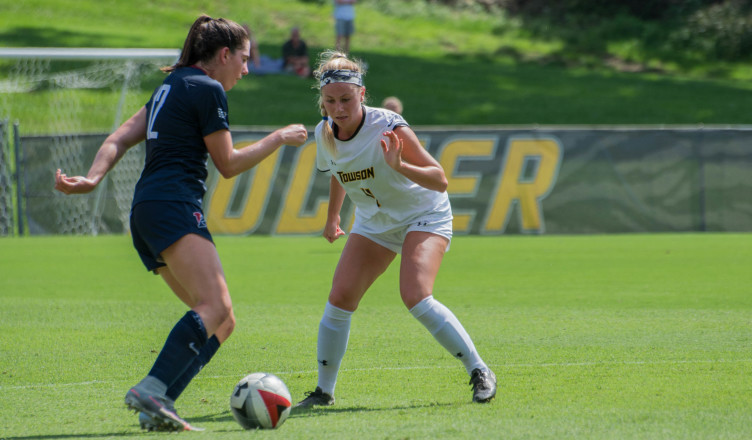 Photo By Brittany Whitham / The Towerlight

In the first half, the game seemed to take a transitional shape as both teams exchanged good chances early on. Off a free kick from the right side of the field, Justine Stoner whipped in a low cross that was run onto by McKenzie McCaul, who controlled the ball with her body. She was able to then corral it towards her feet and find a opening on the right side of the box while running parallel to the goal. McCall struck the ball well, but it went right towards the Penn goalie who was able to catch it into her stomach.

Just a few minutes later in the first half, Midfielder Sarah Quick maneuvered her way with the ball to just outside the box where she struck the ball low, swerving to the left side, but the goalie was able to dive and stop the ball. The two squads went into halftime scoreless with Towson outweighing Penn in shots on goal, 5 to 1.

However, the 2nd half proved difficult from the start for the Tigers as the Quakers struck 2 minutes and 4 seconds into the half. So, as the game went along, Towson continued to press their defensive and midfield players farther up the field to increase a chance in a high danger scoring opportunity.

Senior goalie Meghan Collins had another great game, this time helping keep her team in the game with 4 saves, including one in the 69th minute where she made a fantastic one on one save off a a breakaway that was caused from a thorough ball, exploiting a tight gap in the Tiger’s defense, who also had another good game keeping the ball out of the net, especially in times when it seemed that Penn would certainly capitalize.

When asked about her thoughts on the teams overall performance, coach Vettori said, “We didn’t finish our chances and I think a series of errors resulted in their goal…”.When asked about the improvements she has seen in her team over the past week, Vettori said, “Especially the first half, we had the better of the shots and shots on frame. So we just need to have a little more composure in the box and stick it in the back of the net.”