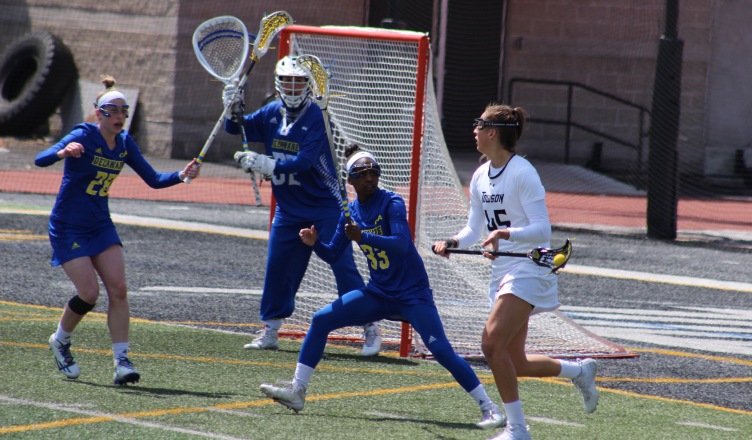 “It was a real back-and-forth affair in the first half, but we found our rhythm in the second half,” Head Coach Sonia LaMonica said. “We started playing more to our game.”

Delaware got on the scoreboard a few minutes later, but Towson quickly responded with an unassisted goal by senior midfielder Kaitlyn Montalbano to go up 3-1.

It looked as though the Tigers were ready to go on one of their big scoring runs, but the Blue Hens kept things close.

Both teams exchanged goals midway through the period, but Towson finished the half on a high note as redshirt sophomore Maddie Dickman scored on a free position opportunity, and junior attacker Natalie Sulmonte punched in an unassisted goal to give the team a 7-4 advantage going into the break.

The visitors looked locked in to kick off the second half as Gosher recorded a goal and an assist early in the stanza to help her team narrow the deficit to one, but Montalbano found the back of the cage on a quick dive to extend Towson’s lead again.

The Blue Hens looked to keep the game tight, but they committed several fouls midway through the period that gave the Tigers easy scoring chances.

Junior attacker Carly Tellekamp capitalized on back-to-back free position opportunities with two goals, and senior midfielder Emily Gillingham rocketed in a free position goal to give the Tigers an 11-6 bulge with just over 15 minutes left to play.

Delaware also struggled to get the ball past sophomore goalkeeper Kiley Keating. She finished the game with 14 saves and helped hold the Blue Hens to just one free position goal on eight chances.

“Throughout the game there’s plenty of possessions where the defense has to have my back and free positions are the time when I have to have theirs,” Keating said.

The home team piled it on from there as they outscored Delaware 5-1 in the final 14 minutes of the game and held on for the win.

Sulmonte and Gillingham both finished the game with hat tricks.

“Natalie is tenacious and tough to stop when she’s inside the hot zone,” LaMonica said. “And Gillingham has been a great finisher for us. She’s a great initiator [who] creates slides and finishes great shots.”

Towson cruised to a resounding 20-5 win over Drexel Friday night at Vidas Field in the team’s first CAA matchup of the season.

The Tigers accomplished multiple milestones on the day as the team tied the second-best start to a season in school history, and Tellekamp registered her 100th career goal.

The road team got off to a strong start as sophomore midfielder Annie Sachs got the team on the scoreboard first just 16 seconds into play.

The visitors jumped out to a 6-1 midway through the first half, but the Dragons (3-8, 0-1 CAA) cut the deficit to three with two quick goals.

The Tigers regained control of the game with a 6-0 run to close out the period, taking a comfortable 12-3 lead going into halftime.

Drexel couldn’t stop the road team from pushing the pace, as Towson registered eight goals in the second half en route to a victory.

Towson look to build on its five-game winning streak when the team travels to Rudd Field Saturday night to battle Elon. Game time is set for 6 p.m.