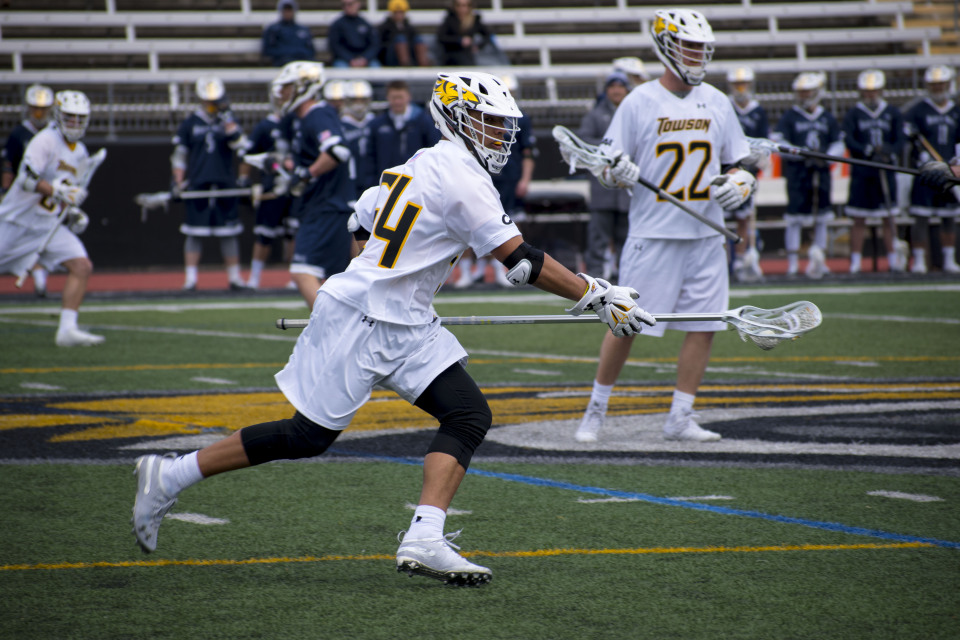 Win, and you’re in. It’s one of the most pressure packed situations you can be in as a team, but this weekend the Tigers showed it’s a moment that they relish.

“We knew what was at stake, and these guys stayed positive and poised in difficult times,” Head Coach Shawn Nadelen said. “We were able to earn that win, so I’m real proud of these guys.”

This win also came on senior day, meaning the eight seniors on the roster could have a chance to hoist a CAA championship trophy to close out their careers.

The Tigers (6-7, 3-2 CAA) came out of the gates firing as redshirt sophomore Matt Sovero found the back of the cage just two minutes into play. The midfielder has had a strong second half of the season, scoring eight times in the last five contests.

Junior midfielder Grant Maloof ripped in back-to-back goals midway through the first quarter to give Towson a 3-0 lead going into the second. The team followed its season-long mantra of sharing the ball, as three different Tigers recorded assists in the period.

The Stags (4-11, 1-4 CAA) got on the scoreboard early in the second as junior attacker Colin Burke flipped in a shot from close range. They stormed back to tie the game with two quick goals a few minutes later in the quarter.

With the Tigers struggling to get anything going on offense, Fairfield took the lead as sophomore midfielder Travis Ford scored a goal from well beyond the cage. Senior attacker Joe Rodrigues followed with a long-distance goal of his own to give the Stags a two-point lead.

Fairfield took advantage of Towson’s eight turnovers in the second, keeping the pressure on the opposing defense with 14 shot attempts throughout the period.

“We’d love to decrease [turnovers] like we know we can,” Nadelen said. “We have to continue to play cleaner, stay aggressive and disciplined.”

The Tigers finally showed some life on offense as junior attacker Timmy Monahan punched in a tough angle goal just a few seconds before halftime to cut the deficit to one.

Towson got back to sharing the ball around on offense in the third quarter with quick passes and good ball movement.

“We’ve been in a lot of tight games so there was no panic,” redshirt senior attacker Jean-Luc Chetner said. “I thought we did a great job offensively of moving the ball in the second half and we grinded one out.”

The Tigers put in back-to-back goals during the third, both scored and assisted by different players, to regain the lead.

The Stags responded with just over three minutes left in the period as Rodrigues scored off a feed from junior midfielder Jack Brennan to knot the score at six apiece heading into the fourth quarter.

Fairfield retook the lead early in the fourth as sophomore attacker Dylan Beckwith bounced in a shot to give his team a 7-6 advantage.

Chetner answered back for Towson with a quick goal off a timely pass from redshirt freshman attacker Luke Fromert.

Fromert continued his strong play with a goal to give the Tigers an 8-7 lead with just over three minutes left to play. He was hounded by defenders, but managed to retrieve a low pass from Chetner near the goal and flip the shot in while on the ground.

Fairfield got the final possession with a chance to tie the game, but Towson played solid defense to hold on for the win.

“It felt great to play like we know how to play and get that stop for our team after our offense worked so hard for us to get that last goal,” junior defender Chad Patterson said. “It felt really rewarding.”

The team looks to build on the momentum from this win in the first round of the CAA Tournament. The No. 2-seeded Tigers will take on No. 3-seeded Delaware Thursday night in Amherst, Massachusetts. Game time is slated for 7:30 p.m.

“[Our season] has been up and down,” Chetner said. “It’s nice to get some momentum and start stringing wins together. Hopefully we can get a couple more here on the weekend.” 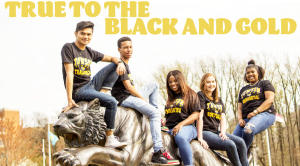 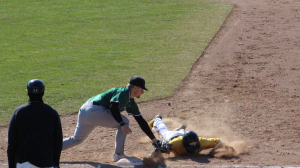